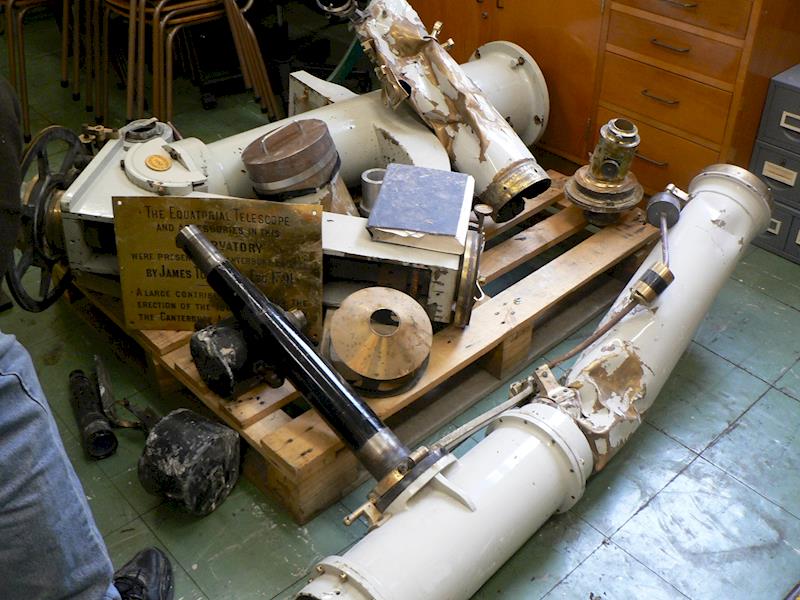 Given by 8 generous donors in around 4 months

The Townsend Telescope was extensively damaged in the Canterbury earthquakes. This fund seeks to renovate and restore the telescope.

The historic Townsend telescope, a 6-inch refractor made by Thomas Cooke and Sons of York, England in 1864, was recovered from the rubble of the Arts Centre tower which collapsed on February 22, 2011 in the earthquake.

The telescope is badly damaged but miraculously the objective lens was completely unscathed. The delicate gears of the clock drive and governor that drove the telescope in right ascension were also recovered and are not badly damaged. The telescope tube is not a pretty sight, but whole instrument can be restored. Also found in the rubble was the telescope log book in which the June 1996 event to mark the centenary of the telescope’s installation at the Canterbury University College was recorded with an attendance from many in the Department as well as by Sir Arnold Wolfendale, the UK Astronomer Royal of the time.

The collapse of the observatory tower in the February 2011 became one of the most striking signs of damage within the Arts Centre. Further damage included partial collapse of most of the gables on the two biology structures, a collapsed chimney and walls on the observatory building. The Physics building is the least damaged of all three buildings.

Read more about the rebuild of the Observatory tower on The Art Centre of Christchurch webpage.

The UC Foundation a registered charitable trust supporting the University of Canterbury's tradition of excellence in higher education. From its earliest beginnings in 1873, philanthropic support and the generosity of donors and supporters has played a major part in the life of the University.

Created by, and paying to a verified bank account of, University of Canterbury Foundation (Charity)
Registered Charity A Registered Charity has legal recognition under the Charities Act 2005.
Tax credit Donations of over $5 are eligible for a New Zealand charitable giving tax credit.
Page Moderated The page has been checked by our team to make sure it complies with our terms and conditions.

Given by 8 generous donors in around 4 months