This page is closed
but One Union Incorporated has a new page...
Check it out 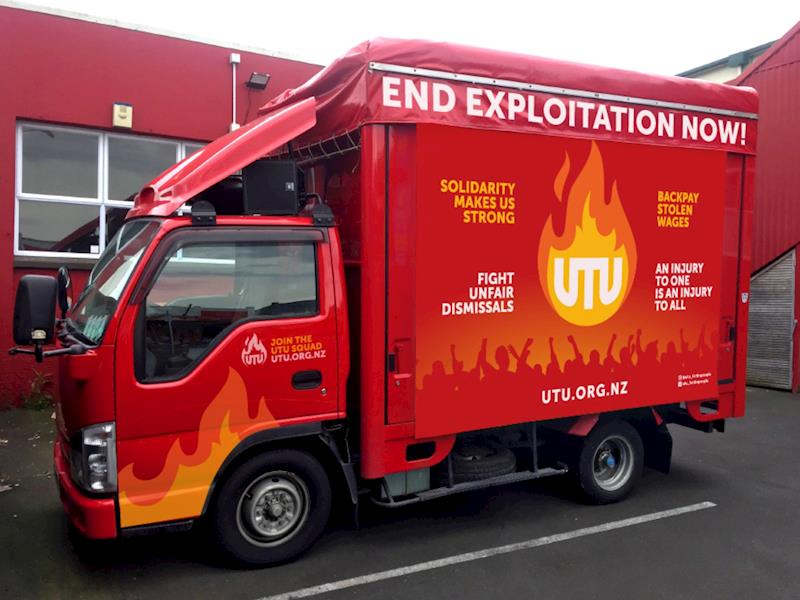 The UTU bus will mobilise the community to win justice for the exploited. Will you help protect all workers from unlawful, horrific abuse?

We need your support to get our campaign bus on the road. We fight for workers who are exploited and abused. Your generous koha will help us expose the most horrific cases of workers’ exploitation. We can then win quick justice for victims.

Many victims have suffered in silence for years. Their lives are shattered. They are financially destitute. Many are suicidal. The worst crimes are mainly against migrants. But exploitation is colour blind. As word spreads of our success, many more victims are emerging from the shadows. They tell us appalling stories of mental and physical abuse.

Most are forced to work long hours for free. To keep their jobs, many are forced to borrow money to pass to their exploiters. Victims are controlled by blackmail and threats of deportation.

2. The Fight for Justice

Here is sample of four cases showing the reality:

Boss gets nearly $500,000 COVID wage subsidy. Made several workers ‘redundant’ with no notice. Hired new staff. Kept all the money.

Trust provides housing to students who are forced to work at businesses for free. Legal gag orders on complaints. To avoid us, boss pretends to be overseas during COVID. But he’s hiding in NZ.

These cases are just the tip of the iceberg.

The abuser’s lawyers delay the cases, sometimes for years. Over time, the victim’s health deteriorates. The stress wears them down and they just want to give in. Victims are pressured to sign confidential agreements for a fraction of what is owed. The exploiter gets off scot-free. This is evil.

We love UTU. It’s uniquely Kiwi. It enshrines the Maori concept of restoration and balance. Wrongdoings are acknowledged, and reparations made. Fabulous stuff! When exploiters avoid responsibility, the UTU Squad, made up of volunteers and using the bus, will rally the wider community to win justice.

4. The Teams That Stepped Up

UTU For the People Squad – volunteers exposing the exploiters and abusers.

5. Will You Help Victims Get Justice?

We are grateful for any koha you honour us with. Offer to join us at justice@utu.org.nz. Our volunteer coordinator Julia will get back to you.

From the UTU, MWA and OneUnion teams.

Donations to the OneUnion Fund go directly to cover the current and future running costs of the truck. With just $5,000, we can get the designs installed. OneUnion took out a $35,000 loan to purchase and fit-out the bus. We will pay it back as we can.

Posted by: One Union Incorporated

Just $5,000 will allow for the UTU bus design to be completed, printed and installed. Kia ora for your generous donations so far. Your koha brings us a step closer to ending the spread of exploitation, and bringing utu, for the people of NZ.

The teams at UTU, MWA and OneUnion

Harry on 25 Nov 2020
I hate injustice and having been through mediation with my lovely bullied and demeaned partner, I know the official system sucks. We had to be educated people to go up against legal and negotiation experts. They caved and apologised, but it’s secret so they just carry on behaving badly to others and to my partner.
$100

Created by, and paying to a verified bank account of, One Union Incorporated (Group)
Page Moderated The page has been checked by our team to make sure it complies with our terms and conditions.

Want to get in touch with One Union Incorporated?