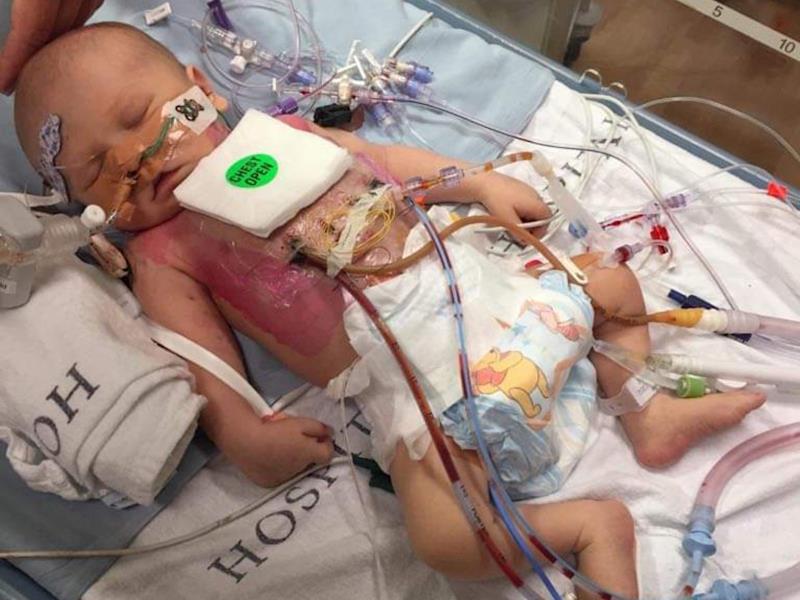 Given by 65 generous donors in one year

Teresa is a fabulous team member at Laker House of Travel and we want to show our support for their journey with baby Thomas.

Words from Teresa's heart about baby Thomas's journey so far and in the future...

"At our 20 week scan we found out we were having a baby boy - oh the excitement. Then my stomach dropped and my breath caught, his heart was not quite developing as it should be, 4 long weeks later they confirmed he would be born with a congenital heart defect, his life was going to be a journey before it had even begun.

From the moment Thomas was born, emotions have been running wild, overwhelming love to absolute heartbreak, how can he look so perfect yet be so fragile? He looks so normal, like any other newborn baby!

Thomas had his first open heart surgery at just 3 days old, the specialists were not 100% sure of his diagnosis at that point. They were hoping they could get away with one surgery and it be fixed but an hour into the operation we received the devastating phone call confirming a Norwood procedure would be done, meaning only half of his heart will ever work and the weaker half to boot. The brutal reality started to sink in that our beautiful baby boy’s heart will never be fixed and he will have to endure numerous procedures and surgeries to prolong his life, eventually jeopardising other vital organs such as his kidneys and lungs. The sorrow was unbearable and the tears flowed.

His second surgery took place at 2 weeks old when his diaphragm was collapsing his lung and he couldn’t breath. It was the first time he physically looked sick, he’d lost so much weight his skin was sagging off his legs and feet, he had turned grey and he couldn’t catch his breath.

We know so far Thomas will have the second stage open heart surgery at 4 -6 months then the final at 2-4 years, also there’s the unexpected surgeries along the way that will trip us over and put us back 10 steps. More trips to Starship for ongoing monitoring and tests then the visits to Invercargill hospital for monitoring if he picks up something as simple as a cold or tummy bug.

Prepare for the worst, hope for the best has never been so relevant to us we hope that Thomas will be one of the 50% of babies with his condition to make it to their 2nd birthday and if he does maybe he’ll be one of the kids who are now making it into their late 20s. We now appreciate how precious time is, no opportunity for a cuddle or a cheeky smile is ever passed up, ticking off the “firsts” milestones and hoping many more will follow. The first time he followed my voice around the room, the first time he did his old man frown that had me in hysterics, the first time weeing on me during a nappy change...

It’s been a 9 week blur already, juggling hospital life, maintaining our relationship and still being a mother to Harriet. Feeling constantly torn when our little family is separated only adds to the mounting emotional turmoil. Andrew and Harriet need to be there to experience these treasured moments also, creating memories that will forever be in our hearts." - Teresa

Teresa is a fabulous staff member and friend in our Invercargill office at Laker House of Travel. I have set this page up to help support Teresa and Andrew with the financial costs associated with Thomas's care, including the continual journeys to Starship Hospital for the family and the additional costs of family life away from home.

Contributions will be spent on travel for the family, accommodation, general expenses to ensure Teresa, Andrew and Harriet can spend as much precious time with Thomas as possible. We would love to help relieve financial pressure for this to occur.

Paying to a verified bank account of Teresa Van Tilborg
Page Moderated The page has been checked by our team to make sure it complies with our terms and conditions.

Given by 65 generous donors in one year