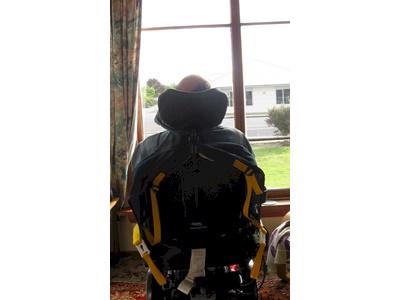 Help us give Alan some freedom by providing him with a specialist van.

Please help Alan to achieve his one wish; a mobility vehicle. Read on for his story…

Alan was diagnosed with Multiple Sclerosis (MS) 20 years ago (1994) and over that time this disease, like rust, has slowly eroded his life and with it his dreams and aspirations. MS has slowly chipped away at Alan’s physical abilities; first his ability to walk and eventually his ability to stand. This took away his ability to transfer into and out of a conventional car and thus his ability to get out and about. To cut a long story short, Alan is now completely dependent on others for all his needs.

It has now been three years since Alan has been able to get out and about; thus three years since he has been able to experience every day occurrences that most of us take for granted such as attending family functions or visiting friends or just going for a drive for no particular reason other than because you can. In those three years any outings beyond a 2km radius of Alan’s home have been to medical appointments or emergency trips into hospital. Alan did not ask for this disease but because of it he has become trapped and isolated in his own home.

Through all this Alan’s spirit and sense of humour has remained relatively intact however, his one fear is that this may not last. In Alan’s own words;

Alan is such an inspiring guy so if you can see your way to give-a-little to help him achieve is dream then Alan would be forever grateful to you.

http://i.stuff.co.nz/timaru-herald/news/10441103/Alan-needs-help-to-flee-the-bonds-of-home Check out the article in the timaru herald and on stuff.Co.nz

Scott Kaynes on 24 Sep 2014
Hi Allan you might not remember me from many years ago hope you get a bigger van than the old Morris minor one you had we used to cruse around Waimate in.
$100

Created by, and paying to a verified bank account of, A Williams
Page Moderated
The page has been checked by our team to make sure it complies with our terms and conditions.

Want to get in touch with A Williams?