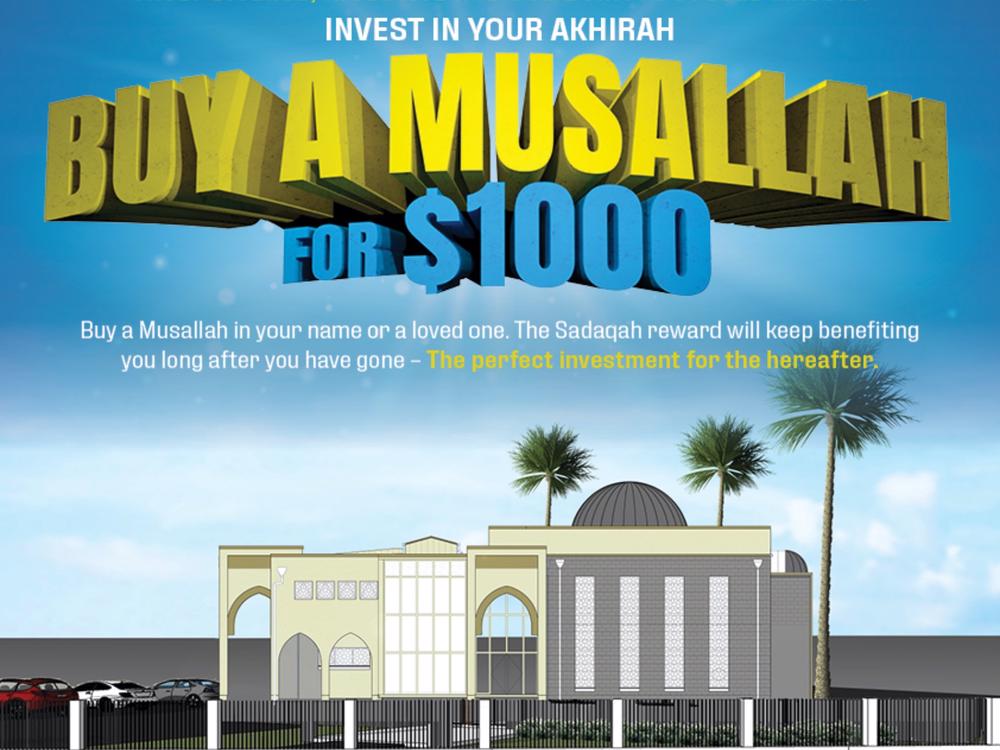 Our extension project has a shortfall of $1.0M. Buy a Musallah for $1,000. Total of 700 available or donate generously. Thank-you

In 1989 there were approximately 10 Muslim families living in West Auckland (Ranui, Henderson, & Massey). A plan for the construction of the second Mosque in Auckland was inaugurated in 1991. Construction gradually commenced in 1994 and one year later, June 1995, Muslims were jubilant to be praying in the newly developed West Auckland Mosque.

The new Mosque will triple in size from its current 270m2 to over 826m2. The total cost of the project is approximately $2m and by the support and generosity of the local people we have already raised $1m – 50% of the project costs. With the global pandemic attaining funds has become difficult and we are requesting our family and friends from abroad and locally to help us complete this project.

The new iconic facility will offer the following services:

2. Madrasah for boys and girls

4. Lift for the disabled and elderly

As you will see on the attached video, we have already reached construction up to the first floor and have the funds to complete the roofing and windows. Your support will help us complete the entire project and Insha Allah will invite everyone to the grand opening of the Mosque once its ready. May Allah bless you and your family for all your contributions and dua. Jazak Allah Khayr.

As Sayyidina Uthmaan (RA) narrates on the authority of Rasulullah SAW

"Whoever elects a Masjid purely for the sake of gaining Allah's pleasure,

Allah will erect for him a mansion in Jannah" (Bukhari. Muslim).

West Auckland Mosque is New Zealand's second Mosque and caters to approximately 500 families. They provide facilities for daily prayers and multiple programs that cater to everyone including the youth, ladies, and families.

All proceeds will go towards the construction of West Auckland Mosque.

Any surplus will be used for Madrassah classes and running costs of the Mosque.

Guest Donor on 25 May 2021
For the Musallah from the Ali Family (Faijaan, Farmaan, Shaidi)
Private

Created by, and paying to a verified bank account of, West Auckland Mosque (Charity)
Registered Charity
A Registered Charity has legal recognition under the Charities Act 2005.
Tax credit
Donations of over $5 are eligible for a New Zealand charitable giving tax credit.
Page Moderated
The page has been checked by our team to make sure it complies with our terms and conditions.

Want to get in touch with West Auckland Mosque?