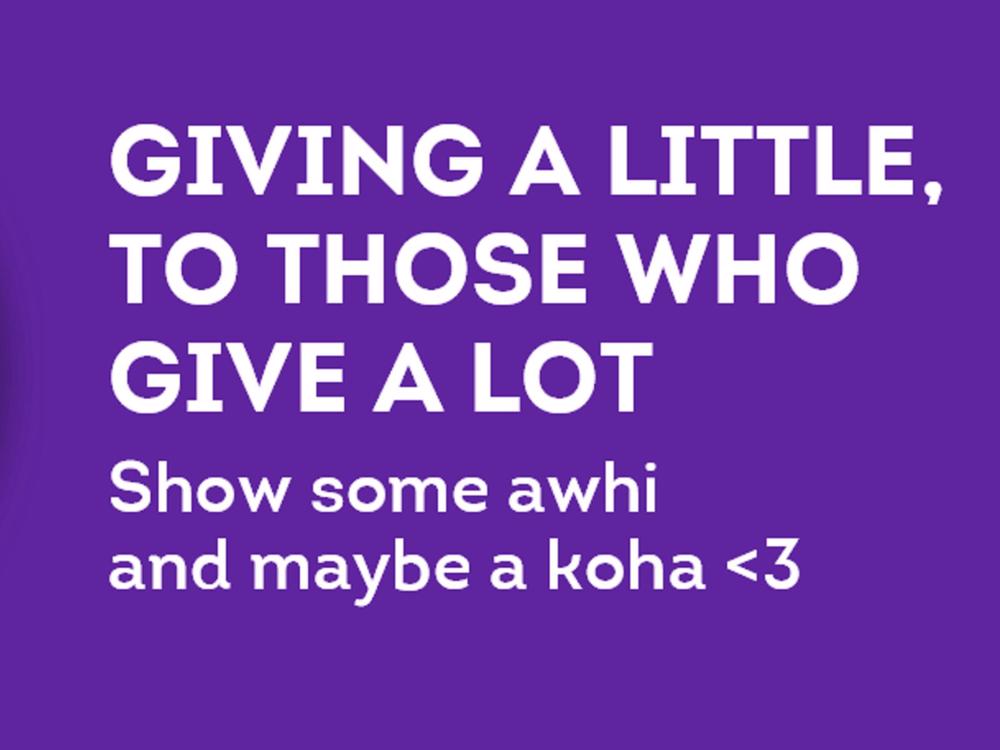 Help spread the Love for Nourished for Nil and Ignite Sports Trust for Kids, who help feed our people for nothing, and lead our kids to lead

Nourished for Nil provide rescued food for absolutely nothing to 1000's of people each month and they really make a difference. They've helped me before. They've also helped get food around the country with past hikois and community engagements which made a big different for maybe only a minority of people while we were travelling round, but it still made a difference. They rely so much on koha to help spread the Aroha and awhi

Ignite Sports Trust for kids are all about that themselves. They work alongside 1000's of kids each yeah running sports, leadership and mental health and hauora programs at different levels of learning and experience, setting them up to carry on with Ignites team in the future, or at least be instilled with some practical life skills for their stage of life. It was hard as a kid, lets be real. They help look after refugee children, kids who struggle and lash out or get frustrated, sometimes involving the law, these guys make a difference in that world as well ya know.

In the past i'd done a ride across at the time, a good part of the country raising funds for Ignite Sports Trust and Youthline Nz. Trying my best to promote mental health awareness while also try and demonstrate the effects of digging deep, while also taking the time to actually smell the roses. Getting a bit of discipline over yourself mentally while pushing physically. It works. Obviously i went through a lot of our beautiful landscape. It not only captivated me, it very much healed parts of me. Its been a big turning point for me and i saw the most beautiful parts of people and the Love they had for others. The sharing and compassion. Encouragement to each other and coming together to raise a koha to show those kinds of people have our support ya know.

i want to give us another opportunity to do that. Not just raising koha either. i mean coming together and showing support. For them as well as others who may read or see something one of you said, and have that life possibly changed from one message.. It happens more than you'd think. Imagine if we were always doing that. I'm not saying were out there trying to be tossers to each other.. Sometimes silence can just be deafening for people. It can kill. How bout we make a noise eh :)

This Givealittle page will be running for the duration of 6 months to give me time to climb every mountain peak in the North Island to try and show a little enthusiasm and dig deep, try to rally some people behind the cause and hopefully we get to plant a few healthy and sustainable seeds in people as we go. After the campaign i'll be continuing on to South island to climb the 10 top peaks to really conquer rock bottom you know. 70 vertical kms north island, 30 down south. Beating rock bottom with 100 vertical kms. Imagine if we get people out on the peaks climbing and grabbing some life together. <3

For the fundraising, this page can be shared around if you all don't mind. It's often the small things that have a big impact.

If you would like to keep track of the climbs while sharing in discussions with people of a liked mind, by all means come join us at Beating Rock Bottom on Facebook and share in some awhi :)

Have i said what i need to? i'm terrible at this. Thanks for the time you've already taken and i hope i've done the message i feel justice there.

What both these agencies do is incredible and its also inspiring that there's still people that go the distance just to be decent people and help others. Nourished for Nil have helped us distribute food out in past hikois too. Think we can raise a koha?

Created by Jamie Kelly
Donations to this page will be split evenly between 2 payees:

Paying to Ignite Sport Trust
Tax credit
Donations of over $10 are eligible for a New Zealand charitable giving tax credit.
Page Moderated
The page has been checked by our team to make sure it complies with our terms and conditions.