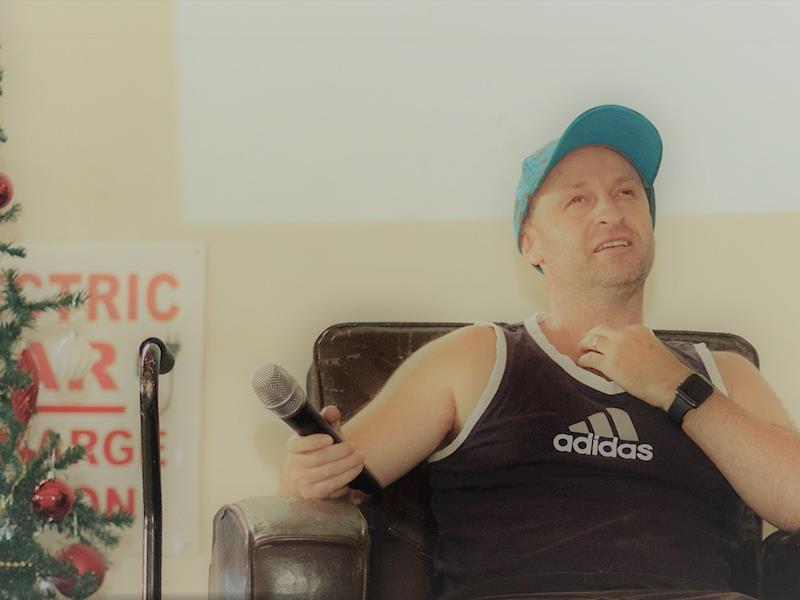 dans le noir - in the dark

Given by 209 generous donors in over a year

I'm 45 with a degenerative disease causing blindness and I can barely walk, but I'm swimming across Auckland harbour in April 2019.

Hi there, my name is Mark Taylor and I’ve been living with a neurological disorder for the past sixteen years.

The neurological disorder I have is called Neuro Sarcoi Dosis, which is an inflammatory disease of the central nervous system. Neuro Sarcoi Dosis is a rare condition and the way it has attacked myself is rarer still.

I was 29 years old when I noticed the first symptoms. However, I didn’t take notice of the first signs as I believed the pain behind my eye was sinus pain. It was not until a couple months later in the month of February that the shit hit the fan.

My brother and myself were down at the farm cutting fire wood when I stopped to rub the sweat out of my right eye. As I was doing this I noticed that I couldn’t see out of my left eye. I asked my brother if there was something in my left eye, of course there wasn’t, just the normal pain that I had since December.

The next morning I still couldn’t see out of my left eye and the pain had got worse. Five minutes with my local GP and I was sent to the eye Doctors at Auckland hospital. After progressing through the hospitals protocols and finally the Consultants I was diagnosed with Optic Neuritis. Optic Neuritis is the swelling of the Optic Nerve and is a common symptom of the disease Multiple Sclerosis.

I remember the Consultant stating that I have Optic Neuritis which we will treat with a treatment of IV steroids and we may see you in another 12 months or longer with another episode. However, I had another eight attacks within eight months and lost the sight in my left eye in the month of October. After the second or third attack the Doctors changed the diagnosis to Steroid Responsive Optic Neuropathy (fancy way of saying I don’t know).

Directly after the damaged was done to the left optic nerve, it started on the right side. With a number of different treatments we were able to maintain sight in the right eye for approximately two years.

So now I’m 35 years old and I’m lying in a hospital bed with no movement in both legs and the strength of my right arm has been significantly reduced. This is a result of the neuro sarcoi dosis affecting my brain and spinal cord. Above, I mentioned that the condition is rare and how it has affected me is rarer still. That’s because generally neuro sarcoid does not affect the spinal cord.

After spending three weeks in Auckland hospital stabilising and five weeks at Middlemore Rehab learning to walk again with the assistance of a walking stick, I’m able to continue with my life. However, you can imagine it is a little more difficult than previously. Even I can walk of some fashion, technically I’m a paraplegic with no eyes. A little worse than the character in the movie Blind Fury.

An actual diagnosis of my condition was made after six years from my initial visit to Auckland hospital. That is why I’m attempting to complete the 2019 Auckland Harbour Crossing swim as a fund raising event for Neurological Research. It would be great to assist in the learning of neurological diseases and hopefully to prevent others from suffering disabilities such as mine.

Therefore, I urge you or your Company to donate to this great cause. Or even attempt the swim yourself and support myself in this great event. Thanks for your generosity and hopefully see you at Westhaven in April 2019.

It would be great to assist in the learning of neurological diseases and hopefully to prevent others from suffering disabilities such as mine.

On behalf of Mark I want to thank everyone that supported him on this page and over the months of training. He is a true inspiration and it's been great to see everyone get behind him and for him to exceed his fundraising goal thanks to some very generous people and companies.

So, thank you to each and everyone of you for your support and if you want to keep track of Mark's next challenge (Swim, Taupo and 10km have been mentioned but no pressure Mark) the best place to keep an eye on what he might decide to do is the Dempsey Wood Facebook page (https://www.facebook.com/dempseywoodnz).

Thank you and please continue to support The Neurological Foundation and all the great research they do.

Paying to the page Neurological Foundation of New Zealand
Tax credit Donations of over $5 are eligible for a New Zealand charitable giving tax credit.
Page Moderated The page has been checked by our team to make sure it complies with our terms and conditions.

Given by 209 generous donors in over a year