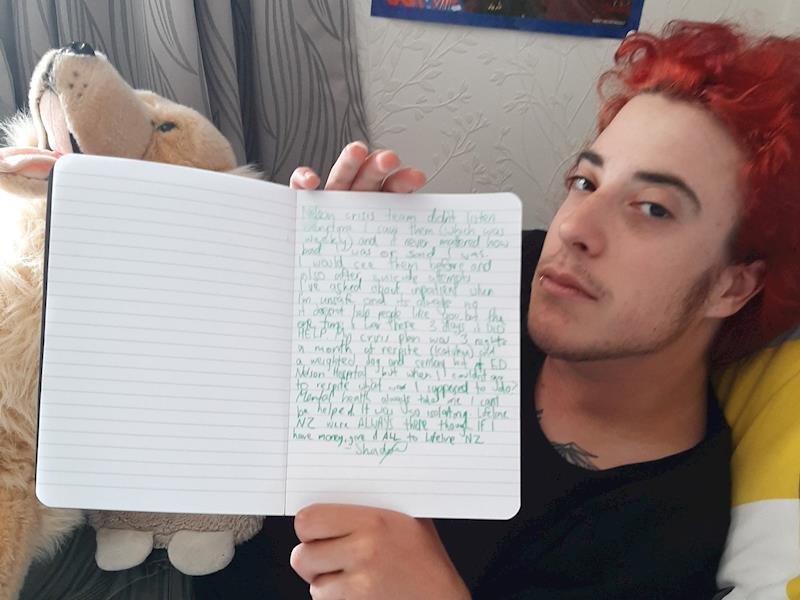 Give Shadow a chance to give back to Lifeline NZ, the organisation that saved his life on many occasions. CW: suicide.

“My friend Shadow, who passed away on the 14th of February, had been struggling with mental illness and PTSD for a long time now.

He was not getting the right supervised treatment from the crisis team and being refused entry to be put in the mental health unit. Due to not being listened to, he turned to Lifeline for help, and many times they were the ones who ended up talking him off the ledge continuously. He regularly told me how without Lifeline he would have died months ago and that they were the only ones to take the time to really listen to him.

Shadow had sensory overloads when he got really low from being triggered, which meant he would become nonverbal and physically unable to speak. The Lifeline text helpline, therefore, was a huge help as unlike the mental health team who would be annoyed when he could only communicate via writing and disregarded it, Lifeline really listened. He would be messaging them daily but due to lack of funding he was only able to receive 10 texts back from them and if that was not enough, he could have a 10min phone call.

We are fundraising money for Lifeline as this would have been what Shadow wanted, so hopefully, with more funding, there will be more people to help others in situations like him.” -Bella Davey

Shadow is one of the many young people in Aotearoa who have spent their childhood fighting for a mental health system that listens, and support from a government-funded alternative to helplines and unattainable private care units, that evidentially trust's a young person when regarding their own needs.

Shadow wrote a letter for this system.

“Nelson crisis team didn’t listen every time I saw them (which was weekly) and it never mattered how bad I was or said I was. I would see them before and after suicide attempts. I’ve asked about inpatient when I'm unsafe and it’s always no it doesn’t help people like you. But the one time I was there 3 days it DID HELP. My crisis plan was 3 nights a month at respite (kotuku) and a weighted dog and sensory kit at ED Nelson Hospital but when I couldn’t go to respite what was I supposed to do? Mental health always tells me I can't be helped it was so isolating. Lifeline NZ were ALWAYS there though. If I have money, give it all to Lifeline NZ.

For $25 you can help Lifeline respond to one call

For $225 an hour of support could've been given to a young person like Shadow in a high-risk situation needing comprehensive attention.

This information is to give an idea of the amount that goes into saving a young person's life through this service. There is no right or wrong donation, pay what you can.

This Give A Little wants to bring light to the systematic injustice within the NZ Mental Health system in order to rally change, but more importantly, we want to give Shadow one last chance to advocate for a good cause in the community and raise money such as he wished to. Lifeline gave Shadow so many second chances at living, and we are so grateful for that.

Lifeline has given so many young people struggling with mental health a second chance, including my friend Shadow. Shadow wanted to give back to Lifeline for the mahi they do for our community so I would like to give Shadow that chance.

Shadow's Wish on 02 Jun 2020
As per your wishes my darling Shadow, I am donating YOUR money to lifeline. Thank you Lifeline for all you did to help our precious child and sibling.
$500

Paying to Lifeline Foundation Charitable Trust
Tax credit Donations of over $5 are eligible for a New Zealand charitable giving tax credit.
Page Moderated The page has been checked by our team to make sure it complies with our terms and conditions.