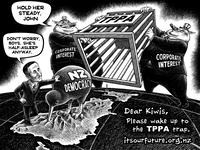 It's Our Future: Kiwis against the TPPA

Secret negotiations on the TPPA are over, but it's not signed or ratified. Stop the sell out of our sovereignty and our interests! 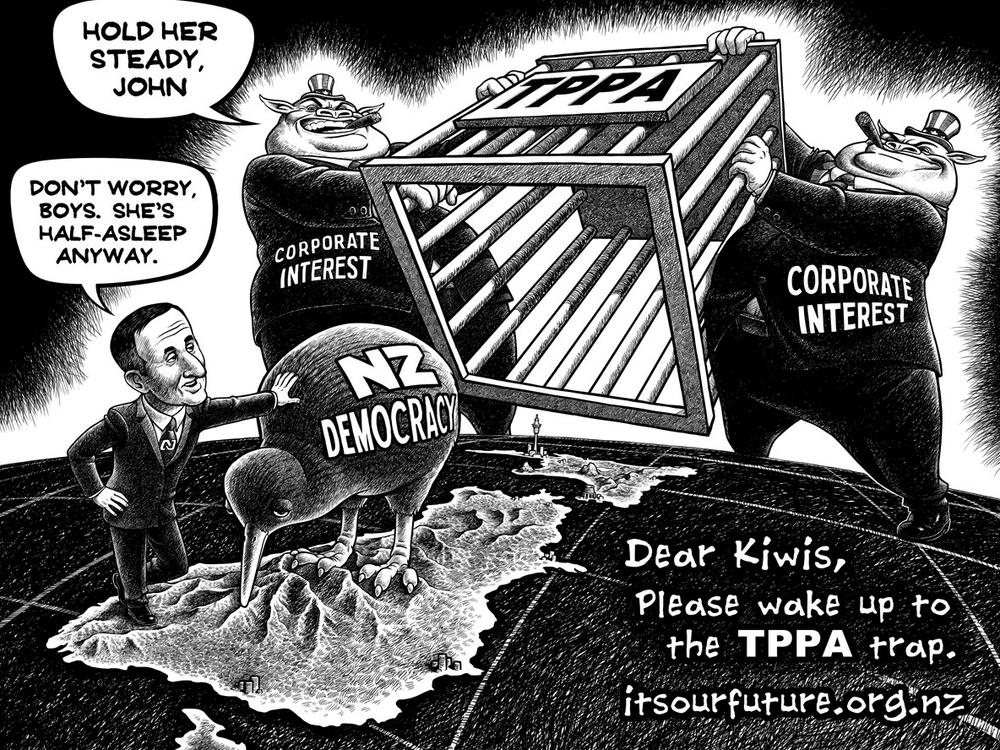 The Trans-Pacific Partnership Agreement (TPPA) was negotiated in secret by the governments of New Zealand, US and ten other countries.

It allows multinational companies to challenge decisions of parliament and our courts in a private international tribunal. The TPPA's rules and enforcement mechanisms will bind the hands of New Zealand governments for the indefinite future, in violation of our democracy, sovereignty and the Treaty of Waitangi.

It’s Our Future is a network of NZ-based activists, academics and interested citizens raising concerns around the impacts agreements like the Trans-Pacific Partnership Agreement will have on NZ public policy and democracy.

It's our Future has led the campaign, mobilising many thousands of people who have repeatedly against the TPPA, and over 100,000 Kiwis who have signed petitions and taken action.

We mobilised the public around the signing of the TPPA on 4th February 2016, with possibly the largest march in a generation - around 35,000 people marched down Queen Street. We mobilised thousands of submissions to the Parliamentary Select Committee hearings and we have persuaded all the opposition political parties to oppose the ratification of the TPPA (but not yet a commitment to reject it if the TPPA has been ratified).

We held town hall events in Auckland, Wellington and Christchurch, promoted a petition with around 60,000 signatures calling on the government not to ratify, and build strong public support - public opinion polls show that a majority of New Zealanders oppose the TPPA.

Now we need to ramp up the campaign! The government is not listening and they have a majority in Parliament. We are joining with allies to hold Days of Action across Aotearoa on 10 September 2016, and gearing up for a major rally in Wellington at the end of October.

The aim is for the TPPA to be a major issue at the 2017 election, and for our campaign to succeed in getting a future government that opposes the TPPA and related agreements, like the China-led Regional Comprehensive Economic Partnership (RCEP).

We need funding for event costs, promotion through traditional and social media and campaign materials. Please support this important campaign!

It's Our Future: Kiwis against the TPPA is a network of individuals and organisations that are mobilising to stop the government from selling out our interests and our sovereignty by signing and ratifying the Trans-Pacific Partnership Agreement (TPPA) and similar treaties. 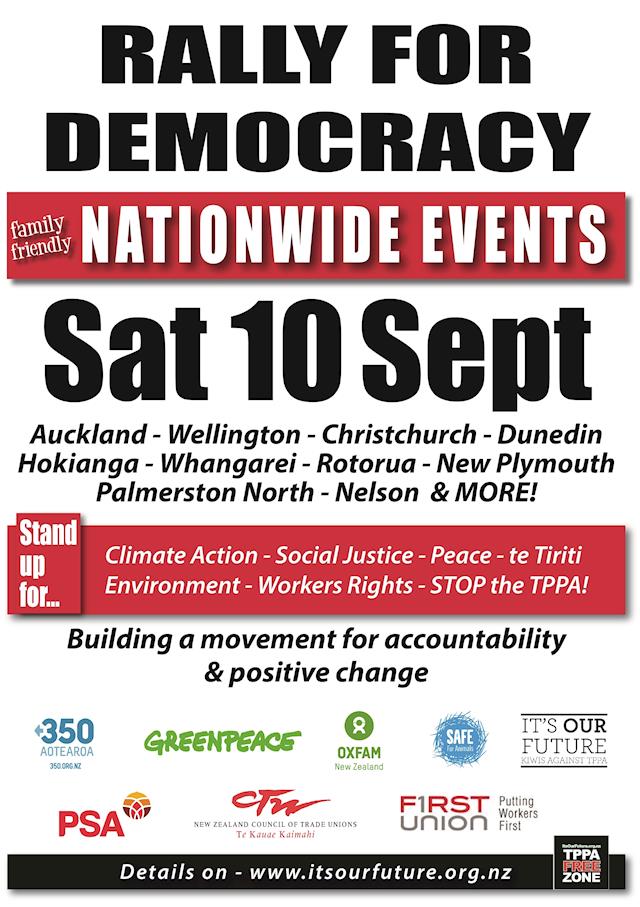 Thank you so much to the generous supporters who have helped It's Our Future get our message out. We are a vibrant network, with no paid staff but we have expenses for the revamp of our website (I hope you like it!), for design, for our E-mail service, and for events. Your help is crucial for our survival.

We are now gearing up for 10 events across Aotearoa new week. Our Rallies for Democracy aim to build a movement that will end the TPPA and its clones. We have the support of major trade unions, NGOs, community activists and some great musicians and speakers who will be at our events. https://www.facebook.com/ItsOurFutureNZ/

The strategy is that we can't rely on US politicians to kill the TPPA - it will be revived under the next President. Instead we need to convince a new NZ government at next year's election to change our trade policy, reject the TPPA and similar treaties and renegotiate existing treaties that allow foreign corporations to sue our government.

We CAN do this! We have a majority of the public on our side. We have more events planned to mobilise them over the next year. Any assistance you can provide will be hugely helpful. Thank you!

It's Our Future coordinator

Created by, and paying to a verified bank account of, It's Our Future: Kiwis against the TPPA (Charity)
Page Moderated
The page has been checked by our team to make sure it complies with our terms and conditions.

Want to get in touch with It's Our Future: Kiwis against the TPPA?