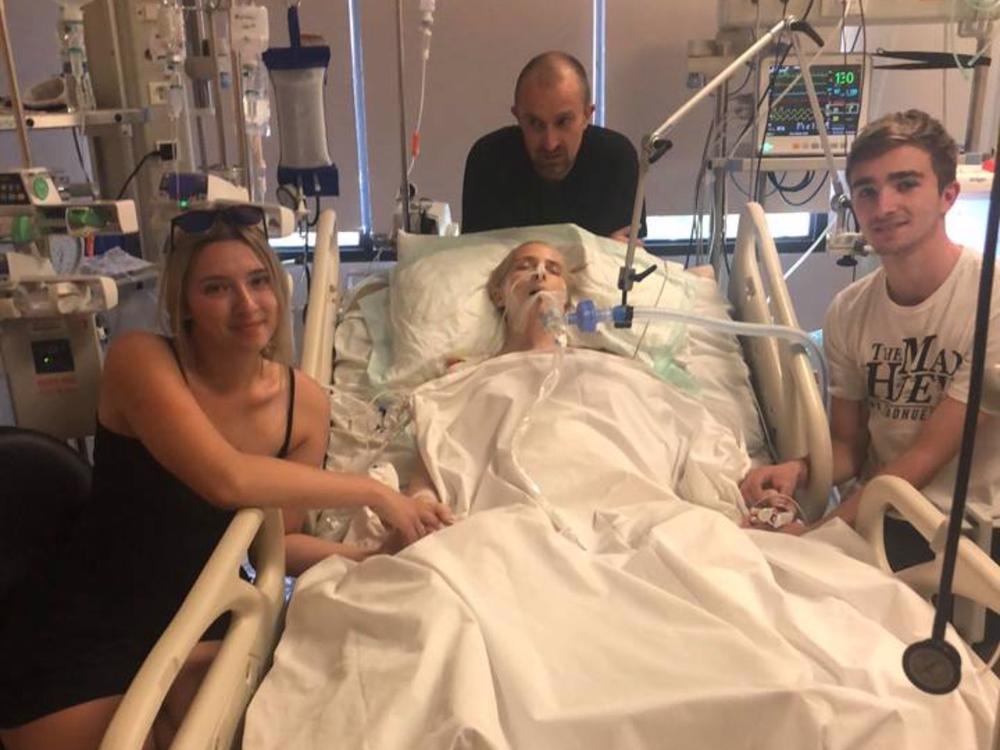 Help Abby fight and get home!!

Our mum is fighting for her life in ICU in a hospital in Bali and doctors are running out of options. We need her home!

Abby Hartley- Mum to Sophie and Toby and wife to Richard Hartley has been in hospital in Bali since 01-08-2018.

26/08 latest update- We have been posting daily updates on mums condition on this page but in a nutshell this is what has been happening..

Mum was in a private hospital in Nusa Dua and hospital bills were stacking up fast so the doctor suggested moving her to a public hospital in Badung which is a lot cheaper and has a dialysis machine that can do a full run over 48 hours so we agreed and mum moved to the public hospital on the 12th August. Mum had the 48 hours of dialysis and we were seeing improvements with her white blood cell count which meant the Septicemia was under control and her kidneys were functioning relatively well again. Doctors have not been sedating mum since 15th August so mum is now in a self-induced coma and this really worried the doctors and us. We know that there is some sort of damage done to mum’s brain but we will not know how much until she wakes up from her coma.

The last 2 weeks we have asked the doctor every day when he think she will be able to fly home to her family and friends and mums condition is very up and down so one day he will say she will be able to fly commercially in the next two weeks and the next day because she is not stable he says she will have to be EVAC’d. So we have been getting our hopes up just to have them knocked back down again. Unfortunately mum has produced another infection which the medical team cannot locate and is making her very unstable, mum has become immune to all the antibiotics they can give her in this hospital in Bali and there is only one more antibiotic that can be given but they do not have it in Bali. The doctor said yesterday that he would like her to get an EVAC back to New Zealand as soon as possible as mum needs to be back in New Zealand with her friends and family as options are running out for him to try in Bali.

Our family and the doctor have come to the conclusion that we would like to get her an EVAC and get her home as it will mean her family and friends can be with her and hopefully with all the support it will give mum that little extra fight she needs, we are hoping for a miracle now. An EVAC comes at a very big cost, $168,000. Luckily with the huge help of family and possibly re-mortgaging our house we can come up with roughly $50,000 and we are hoping with how amazing this page has been, we can get a little more help to get mum home.

I returned to New Zealand on the 17th August to take care of our family tiling business and my dad (Richard) and brother (Toby, 16) are still in Bali with mum, Dad’s visa comes to an end on the 1st September which means he will have to fly to Singapore and then return to Bali and extend his Visa that way. If we don’t get the EVAC the doctors think that mum will be stuck in Bali for many more weeks, possibly even months and we have reached our limit with the hospital bills.

We understand that many of you have already donated and it has been such a massive help, this really is our last resort. Everything counts, even a share is such a big help, we all know how great social media is.

01/08- Mum and Dad arrived in Bali in hopes of a well deserved getaway- first one without us kids. A few hours after arrival mum was in severe pain and got rushed to the closest hospital and then got transferred by ambulance to ICU in BIMC hospital Nusa Dua as her condition was too severe to be treated at the first hospital. After many CT scans and x-rays doctors had noticed a twist in her bowel which had caused a chunk of her bowel to die. The following day mum was taken in for emergency surgery to remove the dead bowel. The surgery was very successful and for 48 hours mum was on the road to recovery until she took a turn for the worst.

She went into a condition that is called ARDS (acute respiratory distress syndrome) and was only taking in 70% oxygen so the doctors made the call to put her into an induced coma and keep her on an oxygen machine to avoid any further deprivation of oxygen to her brain. As if that wasn't enough mum produced a very severe infection and had a very high fever (40+ C)and x-rays showed fluid in her lungs and one lung had collapsed. Dad told us kids to get on the first plane over from NZ as things weren't looking too good and mum needed all the support she could get.

Mum is still on 100% oxygen and doctors are hoping to reduce it down to 40% leaving her to breathe the remaining 60% herself. Last night we had a big scare as mums blood pressure was dangerously low, heart rate was too high and saturated oxygen levels were low so she required a blood transfusion early hours this morning. Mum's infection has progressed into Septicemia and she requires very expensive and rare antibiotics.

After a very long and stressful battle with the insurance company they have made the final decision to not cover any medical costs therefore we have been left with a very expensive medical bill.

Her medical bill includes- 24/7 care and observation, all medications etc.

Mum is a fighter and we can all tell she is trying very hard to fight all problems that are thrown her way. She is showing signs that she aware we are there for her by very small fluttering of eyelids when we talk to her or stroke her hair.

Abby is mother to Sophie and Toby Hartley, wife to Richard Hartley.

All use of funds will proceed towards mums medical costs- eg, 24/7 care and observation, medications/antibiotics and the cost of her stay.

Firstly we would once again, say thank you to everyone who has followed, donated, shared and commented on our journey with mum. We couldn’t have got as far as we did without all of the amazing support from everyone.

We have been doing a lot of thinking over the weekend on all of our costs and funds on give a little we raised.

After a lot of calculations we have worked out that we have $50,000 left from all of the generous donations.

We have decided as a family that we would like to split and donate the remaining money to various charities/organizations. Time and thought has gone into this and we decided to go with charities that were close to mums heart and ours.

One organization we are very excited to donate to is..

Dee is a Scottish lady living in Bali, who heard about our families situation and she helped us out in the very difficult time. Dee runs a school in Badung, Bali, for kids that have been rescued from very traumatic pasts. Dee and the kids invited dad and Toby to join them for a game of football (soccer) which they happily took up. It was a very well needed break and after seeing all of these kids with such positive attitudes gave them a good boost to carry on for the remaining time. Our donation will be going towards a few renovations for the school and basic essentials to keep Dee’s school running.

Secondly, we are also donating to the mental health foundation- https://www.mentalhealth.org.nz/

As mum suffered from mental health it was something that was very close to her heart. She was always willing to help anyone and she made sure mental health was known and recognized.

Finally we are making a donation to the Starship hospital in Auckland- https://www.starship.org.nz/

Mum adored kids and we know she would really love for a portion of this money to go towards kids in need. The donation will go towards new technology and medical equipment to save and extend lives, vital research to ensure better outcomes, boosted family support, staff training and community outreach projects to keep children out of hospital.

From here on out, we are trying to get back into a bit of normality and get everything back on track, it’s what mum would’ve wanted. I can almost hear her now shouting at me for not keeping on top of washing or having takeaways when we can’t be bothered to cook. Woops. This will probably be my last post as this page closes at the end of this month but it has been a pleasure waking up in the morning and reading all of your lovely comments and feeling all the love so thank you!!

All the best to each and every one of you!

Thorburn Builders on 30 Aug 2018
Wishing you and your family all the best. Our thoughts are with you.
$50

Created by, and paying to a verified bank account of, Sophie Hartley on behalf of Abby Hartley-our mother and wife
Page Moderated
The page has been checked by our team to make sure it complies with our terms and conditions.

Want to get in touch with Sophie Hartley?

67 questions have been asked already. Check them out and ask yours here.