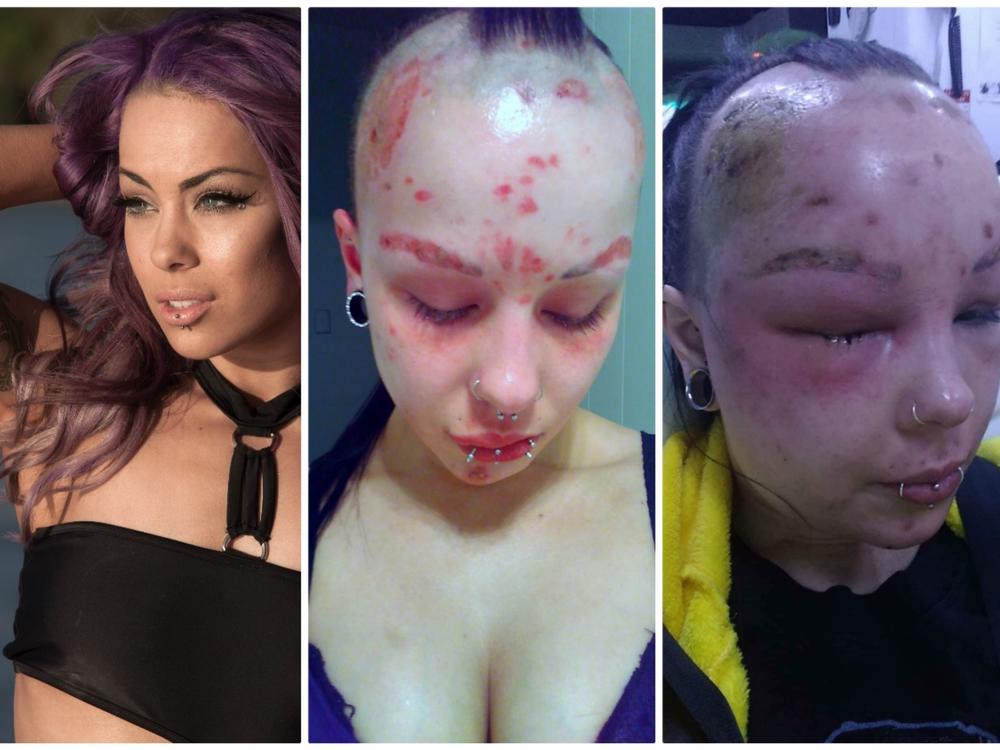 Seven months of hell with few signs of recovery in sight is making it impossible for artist Jessikah to go back to doing the job she loves.

That's Life! and Jessikah have come together to share the REAL story behind the life threatening infection in their latest issue.

Picture Jessikah, a 24 year old self-employed female. She spends most of her 7 day working week flat out with her body mod studio Metal Temple, studying cosmetic tattooing, freelancing weekends as a makeup artist and other odd jobs in the industry. All this, and still barely making it through to the end of the week living on the North Shore of Auckland is a familiar story. Sadly, this kind of superhero approach to life eventually leaves you burnt out, stressed, and susceptible to illness.

January 2018, Jessikah was doing all of the above, plus has recently been diagnosed with glandular ever and an eating disorder, and struggling to get through a horrendous breakup with her now ex-fiance. She had just moved to a new house and was extremely run down, depressed and desperate for some downtime.

So during the first week of February, she invited a couple girlfriends to join for wine and pampering with face masks and waxing. Jess regularly waxed her legs, arms, brazilian and face using salon quality hot wax, and had enough training to do so safely. But this time around, things were different. her skin felt tight and swollen after a couple days, with some small red lumps developing on her legs and braz. As she suffers dermatitis and psoriasis, her sensitive skin regularly flares if agitated, so she thought they might be ingrown hairs, and wasn't too concerned.

Come March, these lumps were everywhere. The lumps didn't go away after bursting, but instead opened up as infected pits in the skin. They multiplied in size and number. Jess went to her doctor who prescribed antibiotics. The lumps (and now sores) got a bit better, but once the antibiotics were finished they came back with a vengeance. It was at this stage, Jessikah was experiencing tenderness and aching around the the infected sites and tension headaches which reduced her ability to work by half. Straight back for more antibiotics it was.

From March to June, the infected lumps developed into sores and abscesses, and spread over her body, the worst being her legs, face and scalp. Her hair fell out where the abscesses were, her eyebrows were lost to scarring. Another two courses of antibiotics failed to give much improvement, and poor health was leading to more and more debt. She stopped eating altogether, barely slept from the pain, and forced herself to work as much as she could.

Finally, on Sunday (10 June), after three days of fever, hallucinations and having to shave her own head to let the abscesses drain, Jess' body became so overwhelmed by the infection that she was completely delirious. She was found by her flatmates on the verge of coma, and rushed to Middlemore Hospital. Her face was swollen beyond recognition, she couldn't see out of either eye, which has given her lasting vision damage. Her skin was covered in sores and abscesses, which have left painful raised or pitted scars which have promptly reinfected, adding to the depth of scar tissue. Premature wrinkles, constantly puffy eyelids, and hair loss have made her even more devastated by the severity of the infection.

Jess was given the diagnoses of body-wide staphylococcus, reinforced by a serious and incurable case of folliculitis, and cellulitis of the scalp. She has since had two relapses and her self esteem have been truly crushed in the process.

Jess will be unable to work for several more weeks while she is still regularly going to hospital and getting the infection under control while she recovers. It is going to be a potentially lifelong battle for Jess, and as she has already dealt with so much, she really needs some help getting her spark back so she can feel herself again.

As she is a body modification artist working on commission, she has been unable to make a living during the two months she has been in and out of hospital. In her industry, no work = no income.

A massive and heartfelt thank you goes out to all donors to the previous fundraiser run by Jessikah's family, which supported Jessikah over the two-month period while she was in and out of hospital.

The first fundraiser can be found here: https://givealittle.co.nz/cause/skin-infection-caused-by-hair-waxing

Unfortunately, Jessikah has received several more blows since being released from hospital.

She was robbed of both her cellphone and a significant cash sum (intended to repay a friend who had financially supported her), by associates of a 'friend' while en route to make the payment, shortly after returning to Auckland. She has since had her employment and tenancy agreements terminated due to the seriousness of her illness.

We are hoping to raise the funds Jessikah needs to cover basics like rent, debts and expenses while she is unable to work and support herself, as well as cover the costs of several sessions of cosmetic tattoo and surgical correction of the disfigurement around her eyes and forehead, and hair extensions that she can wear while her scalp recovers.

Any and all contributions will be graciously and gratefully accepted. For non-monetary conributions, Jessikah can be reached via email at jessikah.ena@hotmail.com.

All money raised will go towards procedures to correct damage to Jessikah's scalp, face, and skin; and to assist with moving and living costs while she recovers and finds new employment in the body modification industry which she is so passionate about.

Colin & Betty Broederlow on 22 Aug 2018
I hope this small donation will help wishing you all the best Jessikah.
Private

Created by, and paying to a verified bank account of, Jessikah Curran
Page Moderated
The page has been checked by our team to make sure it complies with our terms and conditions.

Want to get in touch with Jessikah Curran?