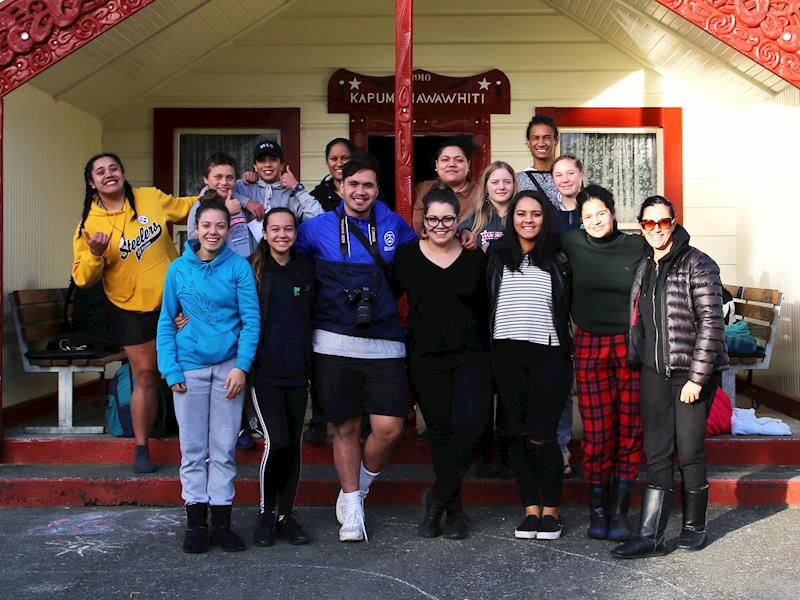 Support Our Rangatahi Filmmakers to work with Youth in the South Pacific!

14 young filmmakers have been selected from around NZ to lead youth filmmaking workshops in the Pacific. To get there they need your help!

Māori connect with other peoples of the Pacific through a shared ancestor - Kiwa, hence Te Moananui a Kiwa - The great ocean of Kiwa.

This September, Through our Lens will take 14 rangatahi filmmakers (aged 13 - 23) from around Aotearoa to the Island nations of Hawaii, Tahiti, Rarotonga and Samoa where they will lead youth filmmaking workshops with other young indigenous peoples.

Now they need your support. Māoriland has gathered funds from a number of supporters and our rangatahi have been asked to contribute $450 each - together, this amount is $6,300. Together we all can help them raise this money!

Over the past three years, Māoriland has delivered fourteen filmmaking workshops for rangatahi around the country. We are constantly amazed and often moved to tears by what rangatahi create once we put the cameras in their hands. Their voice is powerful. Their films have won awards at Māoriland Film Festival and at other nationwide youth festivals.

The Through Our Lens project will see some of the best of these rangatahi filmmakers make films with their peers throughout the South Pacific. On each nation, they will share their knowledge and experience with their peers and collaborate to create a series of short films. These films will be screened at the end of the each workshop to the community, at film festivals throughout the Pacific and then screen at Māoriland Film festival 2018.

These rangatahi will inspire filmmaking both in Aotearoa and throughout Te Moana nui a Kiwa. This will lead to the building of networks and future collaborations both here in Aotearoa and across Te Moananui a Kiwa.

The 14 rangatahi selected for the project followed a nationwide callout and workshop.

They were chosen for their leadership qualities, their passion for film storytelling and an ability to share both their passion and skills with their peers.

Through Our Lens is supported by UNESCO and run by the Māoriland Charitable Trust.

The Māoriland Charitable Trust is the originator of Through Our Lens and will support our rangatahi as they travel across Te Moananui a Kiwa.

Māoriland Charitable Trust was established in 2016 to support the work of the Māoriland Film Festival (est. 2014). Youth have been a core focus of the festival since it’s inception.

E Tū Whānau have supported Māoriland to deliver filmmaking workshops around Aotearoa, this in turn has enabled youth filmmakers to participate in the E Tū Whānau Rangatahi Filmmaking Challenge.

Through Our Lens is the next step in Māoriland’s work with rangatahi filmmakers. These filmmakers demonstrate exceptional talent and a hunger to learn. By taking them to the Pacific we hope to be able to grow their own skills while sharing their experiences with youth around Te Moananui a Kiwa.

Māoriland exists for the social, economic and educational success of its community in Otaki through connection to the wider world of Indigenous creativity and innovation.

The project’s budget including travel, accommodation, kai and workshop related costs is $50,000 NZD.

The Māoriland Charitable Trust has raised 3/4 of the funding and each rangatahi was asked to contribute $450 towards the costs of air travel, accommodation, food and workshops costs. They are raising this money as a collective and aim to raise $6,300.

We welcome your support for this talented and motivated rangatahi and their whānau.

Thank you so much to everyone who has donated so far - we're currently sitting on $3545 from 46 amazing donors. THANK YOU.

The thing is, unless we hit our target, we won't receive any of the money donated. So please, if you know someone who you think may want to support our kaupapa - share this page.

I've attached below another incredible film from one of our rangatahi as an example of what they can create.

Thank you once again for supporting us.

Maddy and all of the Through Our Lens Rangatahi

Sandy Brimblecombe on 29 Aug 2017
Looking forward to seeing more of your great work.
$100

Created by Māoriland Charitable Trust, paying to a verified bank account of Maoriland Charitable Trust (Charity)
Registered Charity A Registered Charity has legal recognition under the Charities Act 2005.
Tax credit Donations of over $5 are eligible for a New Zealand charitable giving tax credit.
Page Moderated The page has been checked by our team to make sure it complies with our terms and conditions.

Want to get in touch with Māoriland Charitable Trust?