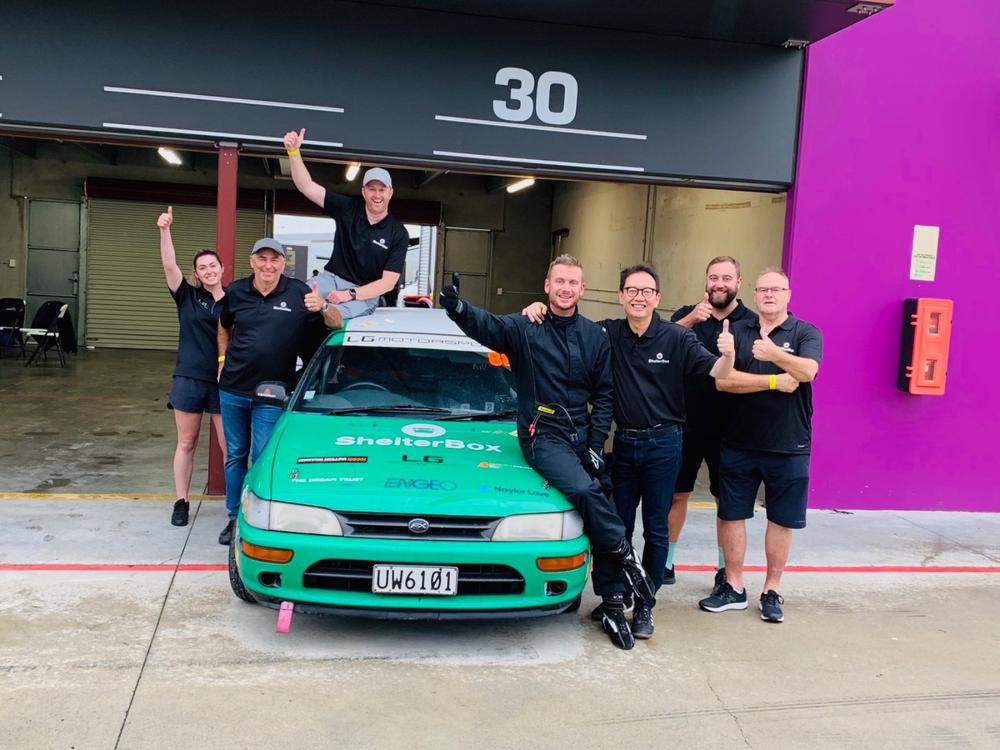 24 Hours of Lemons for ShelterBox NZ

Have you ever dreamed of racing around Hampton Downs - New Zealand’s world-class Motorsport Park, for 24 continuous hours?

Well, Guy Cassidy has - and this September, he’s turning his dream into a reality!

That’s right, from the 19th - 20th February, 2022, Guy and four of his good friends, will be pushing themselves to their limits - spending all day, and all night, racing a ShelterBox-green car around Hampton Downs, as part of New Zealand’s only non-stop 24-hour endurance motorsport event - the "NaZCAR Lemons continuous 24 hour".

But wait, there’s more … Guy’s hoping to raise an impressive $20, 000 for ShelterBox New Zealand in the process! “We are absolutely dedicated to raising awareness, much needed donations and having as much fun as humanly possible at this fabulous event!” ... says Guy!

Guy believes that no family should be left without shelter after disaster or conflict.

As a Trustee, Director, and Past Board Chair of ShelterBox, New Zealand - an international disaster relief charity that hand-delivers emergency shelter and essential aid to families who have lost everything - he’s seen, first-hand, the transformational difference that having a safe place to call home can make in the lives of the world’s most vulnerable.

Now, he’s made it his mission to help even more families around the globe access the safe shelter they need, and find hope for a brighter future, after their darkest days … and all while fuelling his petrolhead dreams!

A play on the French 24 Hours of Le Mans - probably the world's best-known automobile race - NaZCAR’s Lemons endurance race is designed to test the strategy, preparation and sheer perseverance of teams of five drivers, as they spend 24 hours racing around Hampton Downs.

This follows on from their ‘May Madness’ event - which sees teams racing for 24-hours across three-days. Guy and his team also participated in this Challenge, in preparation for the big Lemons event - and managed to finish 17th out of 67 cars (a worthy feat, considering most of them were first-time drivers).

By day, Guy is the CEO of ENGEO New Zealand and Australia. Driven by his strong interest in Corporate and NFP Governance, Guy is a keen member of the Institute of Directors, and a Trustee of both his company’s charitable Trust - the ENGEO Dream Trust, as well as ShelterBox New Zealand.

In July 2016, only a few months after being appointed to ShelterBox’s Board, Guy became Vice-Chair, before moving into the Chair role in 2019.

With 104 million people around the globe currently living without a home, global displacement remains one of the biggest issues we are facing today.

ShelterBox is an international disaster relief charity that seeks to address this - by hand-delivering emergency shelter and essential aid to families whose lives have been devastated by conflict and disaster.

Since their establishment in 2000, ShelterBox has supported 2 million people in 98 countries worldwide.

Unfortunately, due to the operational challenges that have been posed by Covid restrictions, the Lemons event has been postponed again.

After so many postponements, making it down to Hampton Downs is proving to be a bit of a challenge! But, we remain as determined as ever ... and are planning on trying again in the regular September race (exact dates TBC).

Our heartfelt thanks go out to all those who cheered us on, donated, or supported us some way - all of your kind support will absolutely count towards the reprogrammed event later this year.

We'll close this page off for now, but look forward to rebooting our fundraising efforts closer to September.

Fantastic - thank you so much to the Team for your kind support!

Dan on 24 Aug 2021
An awesome cause Guy, and great work on raising so much already. If you need a spare driver for the next one, I'm available 😉 Hope the Green Machine makes it to the finish line!
$50
Guy Cassidy

Awesome - thanks so much for the support and encouragement!!

Thank you for your kindness and support. Always.

Sage advice Princess G - thanks for the support!!!

Paying to ShelterBox New Zealand
Tax credit
Donations of over $5 are eligible for a New Zealand charitable giving tax credit.
Page Moderated
The page has been checked by our team to make sure it complies with our terms and conditions.