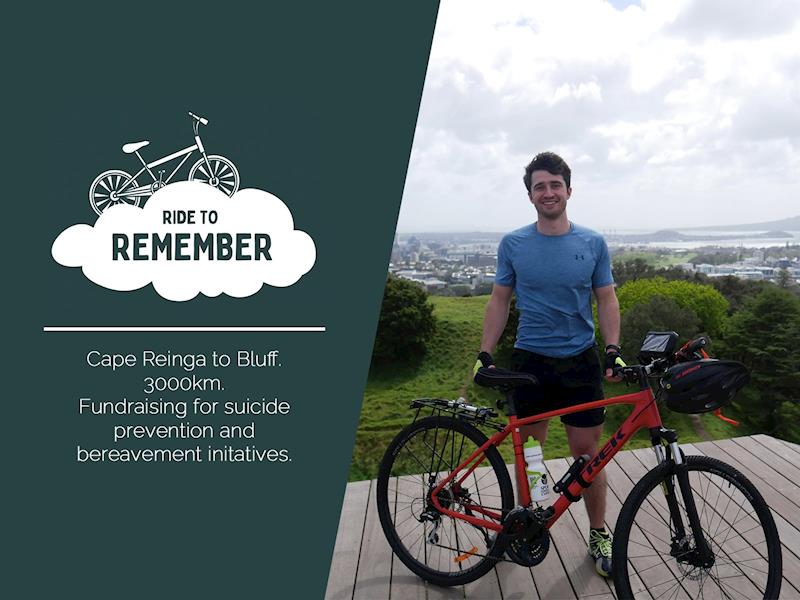 Ride to Remember - Cycling to remember and save lives

Fundraiser page created in the Challenges category by Forrest Axford

Cycling from Cape Reinga to Bluff. Fundraising for suicide prevention and bereavement initiatives. Dedicated to those we have lost.

In February of 2021, I will be taking part in Tour Aotearoa; a 3000km bikepacking odyssey staring at the top of the North Island in Cape Reinga, and finishing at the bottom of the South Island in Bluff. I am riding and fundraising for mental health, for people to have better access to resources and support when they need them. Without such things, many people are left feeling hopeless, and with hopelessness comes on of New Zealand’s most concerning statistics; our suicide rate… which as of last year, was the highest it’s ever been (685 deaths in 2019).

I have mapped out a 21 day route, and each leg will be dedicated to someone in my own circle we have lost to suicide. I will be riding to remember them, to make sure that we don’t have to remember others for the same reason.

This isn’t just my story, it’s all of ours. We all at least know someone who knows someone who has died by suicide… and unfortunately, for many of us, the degree of proximity is a little closer. Whether it be a friend, a parent, a sibling, or a colleague, so many of us have lost people who felt they were lost and couldn’t be found. My uncle died by suicide before I was born, handing down a legacy of grief that changed who I was to become. Since then, I have lost many others, and watched those I love lose people too.

COVID-19 might be the pandemic in the spotlight, but suicide is a pandemic that always stands silent in the shadows. We have one of the highest suicide rates in the world, largely due to a ‘she’ll be right’ mentality that has people suffer in silence and then eventually die in it.

We as a collective community need to do what we can to change this. We need to create safe spaces and let those around us know that it safe to truly talk about what and how they feel. Just because we don’t talk about something, that doesn’t make it go away... yet that seems to be the way of the world here in New Zealand. It's time to change that. Please donate today and join me in making the change.

All funds will be split between the Healing Through Arts & Action Trust & the Mental Health Foundation of New Zealand. In both charities, funds will go directly towards workshops and community initiatives regarding suicide bereavement and prevention. 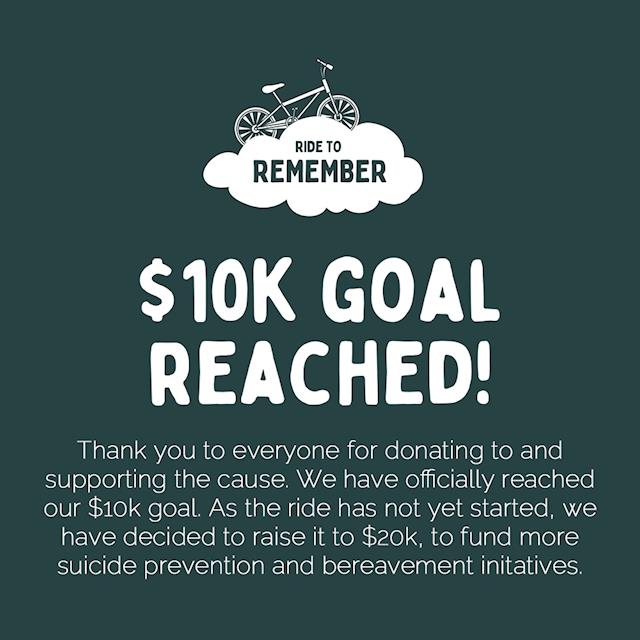 I can't believe it but we have already managed to hit our original $10,000 goal. The support and engagement we have received for this project has been genuinely amazing. So many people have reached out and opened their hearts to us about those they too have lost. I have said it before and will continue to say it but this is something that is affecting us all. We are losing family and friends far too frequently for us to just ignore, and your support here shows you agree.

Because of the outstanding success so far, we have chosen to increase our goal to $20,000. The more we manage to raise the more we are able to put into supporting those who support our most vulnerable.

Stay safe and check in on your mates, you never know who may be too afraid to speak up.

Nikki 4 days ago
Good on ya Forrest. We'll be watching you on your journey. xx
$50

Created by Forrest Axford
Donations to this page will be split evenly between 2 payees:

Paying to Healing Through Arts & Action Trust
Tax credit Donations of over $10 are eligible for a New Zealand charitable giving tax credit.
Page Moderated The page has been checked by our team to make sure it complies with our terms and conditions.