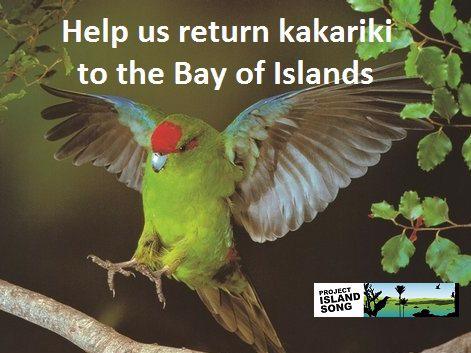 Project Island Song is embarking on its most exciting and ambitious native species translocation since the ecological restoration programme began in 2009. We are now poised to reintroduce kakariki (red-crowned parakeet) to the pest-free Islands of Ipipiri in the eastern Bay of Islands.

Kakariki became extinct in the Bay of Islands many decades ago due to predation by non-native mammal pests. Once common throughout New Zealand, now this threatened endemic parrot species is restricted mainly to pest-free islands. Like tīeke (North Island saddleback), toutouwai (North Island robin) and other the native species already returned to Ipipiri by Project Island Song, the protected pest-free islands now provides a safe-haven for returning this legacy species to the Bay of Islands.

To create a genetically self-sustaining kakariki population in the Bay of Islands, this reintroduction programme is divided into two stages. In June this year up to 40 kakariki will be caught and translocated from Hauturu (Little Barrier) Island to Moturua in Stage One. The requirement for Stage Two and the translocation of a further 40 birds in either 2018 or 19 will be dependent on the outcomes of Stage One.

Kakariki are mobile birds and you will see them flying between the islands and the mainland. Whilst this poses a risk, it is also offers a huge opportunity. In the eastern Bay of Islands hapu, mainland landowners, community groups, and agencies are working together to maintain pest control and are actively progressing towards a mainland ecological island on which kakariki could thrive.

Project Island Song is a wildlife sanctuary. The seven main islands in the eastern Bay of Islands have been pest mammal free since 2009, and the natural eco-systems are being restored. Thousands of trees have been planted, and five rare and endangered species have been reintroduced. Many more species are planned. In this wild life sanctuary you can discover the home of some of the world’s most fascinating and rare wildlife.

Project Island Song is now embarking on its most exciting and ambitious native species translocation since the ecological restoration programme began in 2009. We are now poised to reintroduce kakariki (red-crowned parakeet) to the pest-free Islands of Ipipiri in the eastern Bay of Islands.

For more information on the native species reintroduction programme please check out: http://www.projectislandsong.co.nz/index.php/the-project/species-reintroductions.html

Created by, and paying to a verified bank account of, Project Island Song (Charity)
Registered Charity
A Registered Charity has legal recognition under the Charities Act 2005.
Tax credit
Donations of over $5 are eligible for a New Zealand charitable giving tax credit.
Page Moderated
The page has been checked by our team to make sure it complies with our terms and conditions. 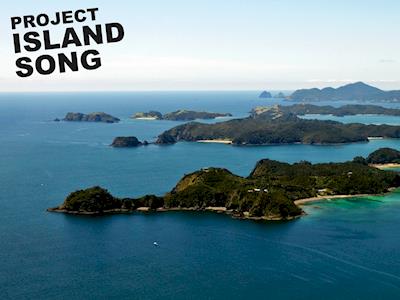 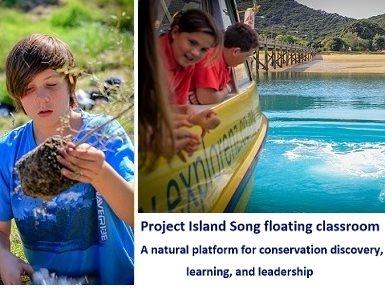 Want to get in touch with Project Island Song?