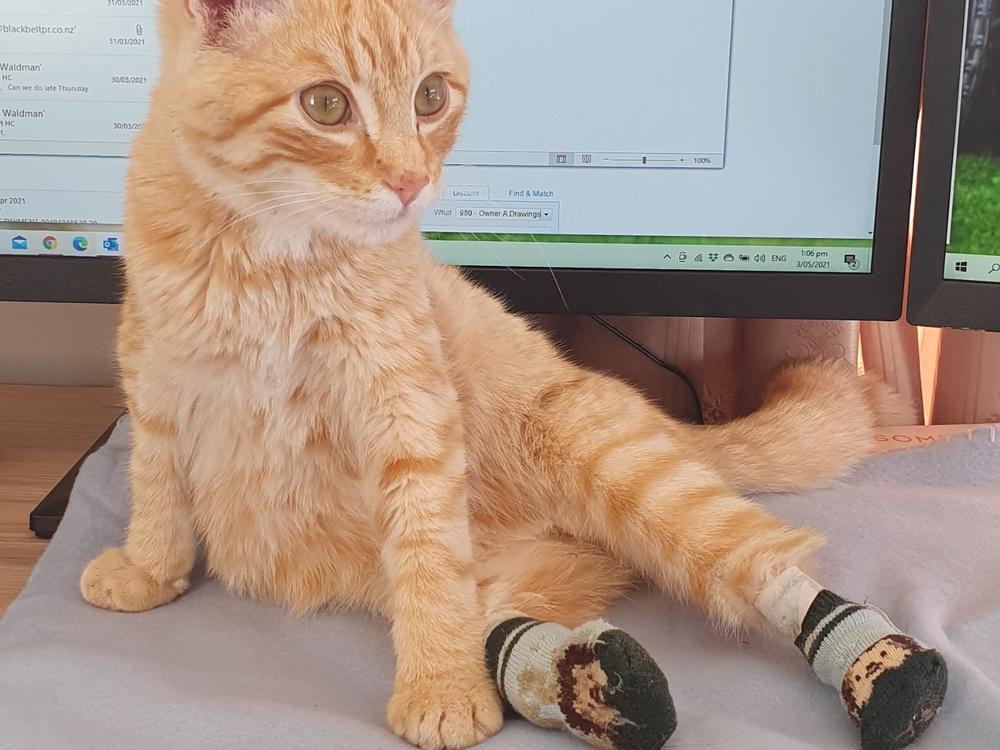 Help us Help Pascoe the abused 15 week old kitten that had his back legs cut off.

Unfortunately at 15 weeks old I have had a hard start to life, I have suffered from being abused and tortured in the first 12 weeks of my life until I found my new family.

I was starved until my bones could be seen, I had no muscle and I was extremely weak and scared. Then before I was dumped, I had half my legs cut off from my abuser. I was dumped in rural area left for dead.

I managed in pain and agony with every last bit of energy I had to find help, that's when I turned up to my new family hiding in there shed for shelter I was scared but I was hungry. I made my way out for food when my new family saw me but I was so scared, I hobbled away to the shed where I was well protected and safe to hide, my new family caught me with a cat trap and that's that's when I broke there hearts.

Hi we are Pascoes new owners, We had saved Pascoe when he had turned up on our land. At first when spotted Pascoe we didn't know what to think. However Pascoes legs being cut of by a horrible person was something we didn't think it could be as it was extremely cruel and inhumane. Unfortunately after catching Pascoe and racing him to the vet that's when our worse fears came true, Pascoe was very malnourished with no muscle at all extremely weak and scared. His back legs had been cut off half way, this was result of him being abused and tortured as his cut was done clean and not possible for anything else that could have done it.

Pascoe was very sick with being extremely underweight and having Infections on his bone/remains of his upper leg, This is from him walking directly on the bone. He could not have surgery until a week after we had found him due to the above reasons. On the 5th May 2021 Pascoe went in for surgery as he had gained 400grams since we had gotten him and being on a special diet. Pascoe was not toilet trained and had no idea how to play like a kitten or even use his front paws however we have put a lot of time to teach Pascoe these things at 13 weeks he played for the first time before surgery which was very exciting for him but also sad to see that he has never enjoyed life like he has now.

Pascoe had surgery to pull skin down to form a stump and stitch the skin up to cover the bone. To this stage we don't know weather or not Pascoe will be able to fully be saved and recover however we are doing everything in our power to make sure he does, Because he loves life so much and is the most sweetest, adorable and loving we kitten and he has fought so hard to get this far and is improving hugely every single week.

Pascoe has been offered through our vet to be flown to Sydney at 8 Months old if he makes a full recovery to have prosthetic legs put on by a surgeon on Australia whom does Prosthetics for animals, he has successfully done many dogs and has not come across a cat that has required them until now..... Pascoe then will not only be the first cat the surgeon has done prosthetics on he will also be New Zealands first cat to have prosthetics only small to none of animals in New Zealand have received prosthetics so this will be a major break through for a lot of abused animals in New Zealand. This offer had been donated by the surgeon in Australia as a very generous donation which we are extremely grateful for.

However currently Pascoe still has a long way to go till we can at all think of that. We have to take Pascoe to the vet every second day for bandage changes and to have his wound cleaned. Then on top we have medications and light sedation the vets have to use to change the bandages with as less stress possible Pascoe this adds up financially very fast. It's costing us $300+ a week averaging at roughly $100+ a visit, we have to do roughly 4-5 weeks of this until he can become a outpatient that is when he will still have to go regularly but not every 2 days as he won't be as critical then. Pascoe is putting on 100-400 grams of weight weekly and improving, This is through a special diet. This diet he is put on is because of him being very underweight and malnourished he has special food that is expensive and has to be feed every hour, Only small amounts of food he is allowed as he needs a lot of food to gain weight and is very hungry however Pascoe only has been taught that any food he has he has to scoff back as that will or can be his last feed for a while. Pascoe now when he eats he scoffs food until he vomits so we have had to restrict him to smaller amounts and times to allow his tummy to proper digestion food and to give him time to digest his food.

Pascoe is a very happy kitten and extremely grateful, he has nothing but love and affection from us. He is wanting to and fighting hard to push through this horrible time. We have started this givealittle page to help get donations to help with the care and needs of Pascoe to get him through all this as it is starting to financially challenge us more and more every week so all help with donations is more then apricated by us.

Please help us help Pascoe, we have set up a tik tok regarding Pascoe story to help people help abused animals and make them aware of animal abuse. Follow pascoethegreat for more.

Vet bills and expenses for pascoe to have the best. If things didn't go to plan money will be to have still give pascoe the best and help more abused Animals 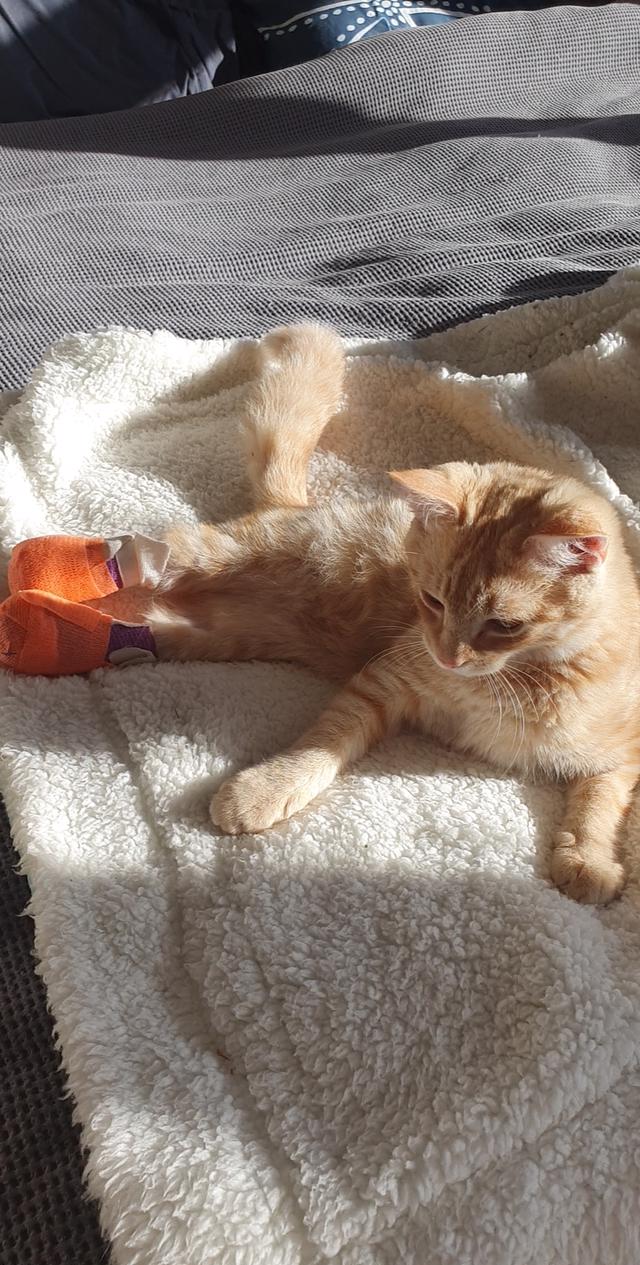 We have been astonished at the amount of love and support we have been getting regarding Pascoe, the donations have been more then generous and have helped well and truly beyond. This has been a huge surprise to us on how many donations have come in and all the beautiful kind worlds. It's given us a few tears to know that there are some amazing people out there and that Pascoe has stolen the hearts of many not just us.

UPDATE on pascoe regarding his vet visits, he has improved hugely. His legs are healing beautifully and are looking so clean and the infection we are beating well so Pascoes future is looking very good for him he has been a very strong wee man and has incrediblely well we are so proud of him.

DONATION UPDATE: Pascoes vet bills will continue to keep going they have come down a little now to 60-80 a visit now due to him stopping pain killers as now he is old enough to have the anti-inflammatory and painkiller in one which is great. However the donations we have had are well and truly enough to help us help him for a long time we have a personal budget for Pascoe to as its been part of taking on a animal so with donations and our budget Pascoe is sorted for life thanks to so many of you out there words can't describe our appreciation.

Pascoe as one little kitten has stolen all of our hearts this has got me thinking there are so many kind people out there like cat protection, Spca and many others that help abused and injured animals but they do this with more then one animal and I couldn't imagine the way they must feel with what they see on causual daily bases and unfortunately there are people out there who think it's okay to hurt animals when it is not thats why we want to try help them so they can help all the many animals out there who go through the same as what pascoe has been though. We now would love to help pass on future donations to help many other animal abuse savers like us to cover food, medicine, surgery and all other requirements these poor animals need to give them the best chance in life. We belive animals don't have a voice to stand up for them selfs in abuse so we have to be there voice to help save them by helping these places cover some costs with donations that they can save more animals. We want to let all donations that are coming in now that are over what we hoped to help Pascoe that they will still be to support another animal. Pascoe and us are extreamly greatful and he is so Glad that he can help his wee animal friends like him out.

We will put up updates on here regarding details of all donations.

Brigette on 23 Jun 2021
Your gonna be fine Pascoe you have some lovely new owners who will care for you well.
$100

Created by, and paying to a verified bank account of, Sophie Blair
Page Moderated
The page has been checked by our team to make sure it complies with our terms and conditions.

Want to get in touch with Sophie Blair?