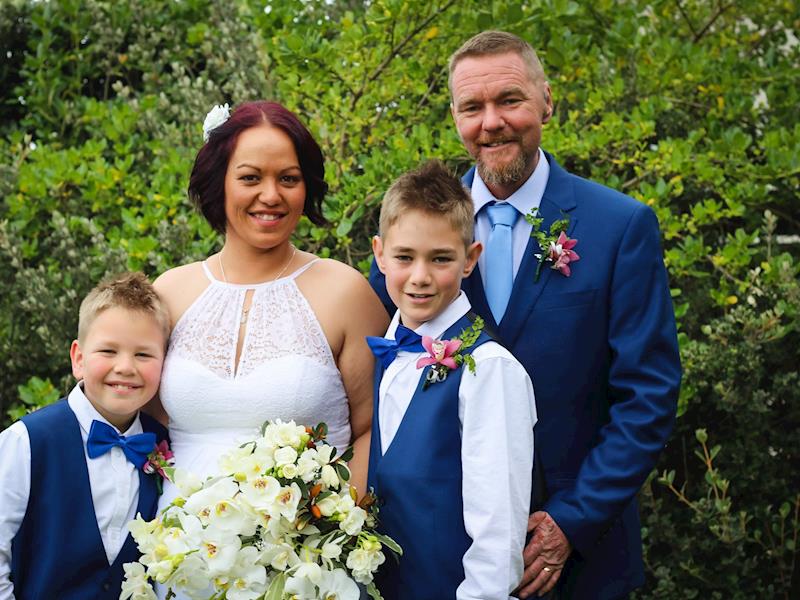 Support The Hercus family, Andrew, Kiri, Tyler and Kobi through their Melanoma journey

Cause page created in the Health category by Kiritea Morehu

Given by 69 generous donors in around 3 months

I'm having a hard time and really need help financially to spend the last few months with Andrew - not at work while he’s dying at home.

He was diagnosed in February 2019. His cancer is so aggressive that over the past 12 months he has had Surgery to remove 7 nodes and a salivary gland, he then had 3 months immunotherapy (pembrolizumab) as well as Radiation to the ear and neck. With that failing, he then had 6 months targeted treatment (zelboraf and cotellic) which we spent $60k in 2019 on these unfunded meds but his last CT scan in January showed the devastating news that it has spread even further.

Unfortunately it has now reached his brain. He also has a huge hole in his sternum and because this cancer has eaten away at it he finds it painful and hard to breath at times.

The cancer has also spread in the spinal bone, liver, and a lung. I'm trying not to lose hope.

He's now having a chemo drug called Dacarbazine and has just finished 5 rounds of radiation to the brain and one to the sternum.

The discomfort he's in is heartbreaking to watch. I try to stay on top of the side effects to ease his discomfort but the cancer is so unpredictable that it feels almost impossible.

Side effects are headaches at 8/10, chest and shoulder pain 8/10, edema, cancer fatigue, body rashes, nausea and he can't sleep more than 3 hours.

It’s heartbreaking that everything is failing yet his strength and will to survive is so strong. We may have to try another drug which could be another expensive unfunded road again and after being given an even shorter time frame with the advanced pace its growing now at with 10 new mets on his brain. I can't believe I'm raising almost $10k a month again. It almost sent me into a depressive state last year, begging daily was exhausting, repeating my hurt was even harder, but here I am in the same boat about to be drowning in medical bills.

We hope to try Ipilimumab (yervoy)/ or opdivo (nivolumab), both are proven immunotherapy drugs. Im hoping to raise enough for a few months worth of these drugs but also I am asking for time with my husband instead of working to pay his medical bill.

I wish the drug companies helped the dying families financially more so we don't have to beg and borrow to keep our loved ones alive.

On one income we have done everything possible to ensure we dont get behind on bills and that his debt is cleared, and theres enough so his funeral is covered.

All part of this horrible journey unfortunately, But now we don't have enough money to allow me to take time off work and enjoy the last months of his life with him and our kids instead of only his worse days to caretake.

We had began a bucket list last year and there’s a few things that can no longer be done now with brain mets. So we have redone the list and hope to take the kids to a Hurricanes game next month, go to the observatory, fishing off the mussle barges in the coromandel all things we could actually try to achieve in the time frame as a family creating those precious moments they 'll remember. The kids are informed but unaware of the seriousness, they need to still be able to laugh and play without the heaviness of the word terminal.

We've had to make some seriously hard decisions and big sacrifices too.

Coming to terms with being terminal ourselves and planning Andrew’s funeral was a deeply heartbreaking day. But living in reality and trying to beat the beast proactively is a daily challenge for both of us.

Updates for this page will be as often as his condition changes, some maybe of how this Mama and wife is coping throughout this journey one I'm terrified to ride and would appreciate your supportive words and positive vibes and if you can spare a few dollars I would truly appreciate every donation given.

Money is time for this Hercus family.

It is with great sadness that write this, but Andrew Graham Hercus passed away on Thursday 19th March 2020.

He was with his family and fought till the very end. My darling husband did not want to die, he held on to make sure he knew everything was set up in place, finished around the house and until he had heard every message sent.

The precious moments we had before he took his final breath I will forever hold in my heart.

As his wife all I wanted was for him to feel like he had accomplished everything one would have in a full 80+years of life.

He was the perfect husband, the greatest father, an honest, trustworthy, loyal, down to earth straight up gentleman. A man who everyone who ever came in his life at some point will all say the same thing. He really was a good hard working man. He always held the door open, always put the seat down, was OCD about cleaning, and always made time for his kids.

He owned his own home, a boat, had 2 kids, a wife and a dog. His bestmate lived with us till the very end, his families once split through trauma now talk, laugh and have made peace with the past. His kids future is set to look promising.

He got to hear from his birth mother moments before passing.

The boys have soft cuddle buddy gifts from their dad. Inside the buddies are 1000s of hugs and 1000s of kisses, and messages from them to him and him to them were exchanged with hugs locked in. Many messages are locked deep for the future and will be heard when the time is right for them.

All the memories made over the past year will be forever with us and he will be missed everyday.

Thank you all for supporting me during my Melanoma Journey but it ends now and a new life begins without the love of my life beside me. Give me strength and courage for our boys. I will take it day by day.

Rest in peace my darling Angel. You'll be missed by lots that's for sure.

Created by, and paying to a verified bank account of, Kiritea Morehu
Page Moderated The page has been checked by our team to make sure it complies with our terms and conditions.

Given by 69 generous donors in around 3 months