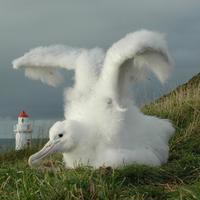 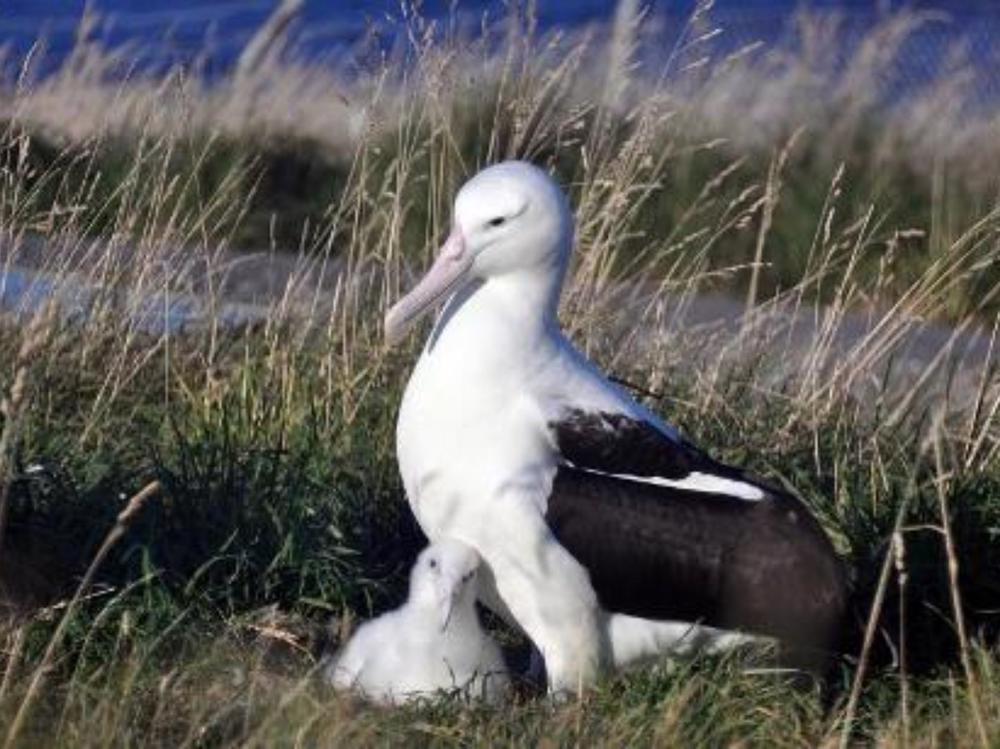 Help us fly into the Future...

We need your help to support the Royal Albatross while they raise their chicks at Pukekura/Taiaroa Head - the only Royal Albatross breeding colony on a mainland anywhere in the world - its a very special place!

Help keep the Royal Albatross Centre open to inspire the next generation of conservationists; invest now to assist albatross to thrive.

For over 50 years we've shared the awe of seeing charismatic breeding royal albatross at the world's only mainland colony. We've hosted many thousands of visitors, sharing our love of albatross, their struggles, successes and financially helped albatross survival. We've excited generations of school children with our education programmes, our team have volunteered to assist DOC Rangers to care for albatross, we've patrolled for predators and fundraised to buy supplies and equipment for albatross nurturing. We've helped the albatross colony grow from a few chicks to a thriving successful colony with an increasing amount of beautiful majestic albatross chicks fledging their way out into our world.

Now, with the effects of Covid 19, we've lost our major source of income, our visitors. The funds we raised through giving tours, hosting visitors in our cafe and selling gifts has plummeted. This means our ability to raise funds and help with albatross care and education is limited. We're committed to staying open and sharing albatross with visitors - but we need your help!

Please help us by donating to our nest egg. This will help us support Royal Albatross care by assisting us to keep our centre open, to host visitors on tours and raise funds to support DOC with their albatross care. We'll be able to continue our critical work on albatross promotion; inspiring people to care about wildlife and our environment making a difference to albatross survival.

The Royal Albatross Centre is a not-for profit organisation under the Otago Peninsula Trust which has been protecting and conserving wildlife including the Northern Royal Albatross for over 50 years. We are home to Royal Albatross, Little Blue Penguins, The endangered Red-billed gull and many more species. We also help facilitate, education programmes to schools, conservation research and even have our own penguinologist doing amazing research! We are home to approximately 250 albatross and 20 other species. We proudly promote Dunedin as "The Wildlife Capital of New Zealand" , encouraging people to visit and learn at the Seabird Centre with its iconic Royal Family.

Pukekura albatrosses are unique in that their colony is the only place in the world where they can be viewed on a mainland.

• The Northern Royal Albatross is a taonga species, valued and admired by all New Zealanders and international visitors

- Albatross have one chick every two years, mating in September/October, eggs laid in October/November, chicks hatched January/February and raised until they fledge September/October. The parents then have a year off.

• Viewing royal albatrosses at Pukekura contributes to eco-tourism in Dunedin

• Chicks fledge in September and don't come back for 4-7 years.

Pukekura is an unmissable wildlife paradise. The headland is home to the korora (Little Blue Penguin) Colony, the Royal Albatross Colony, a seal colony and nine types of nesting birds with over 20 species spotted around the area.

Please donate and assist Otago Peninsula Trust, NZ's First Private Charitable Trust established in 1967, with it's projects to protect wildlife and heritage assets and share them with locals and their visitors.

Otago Peninsula Trust's mission is to 'Preserve and Enhance Otago Peninsula'. A guardian and careful custodian of wildlife and heritage to benefit the wider environment and community. 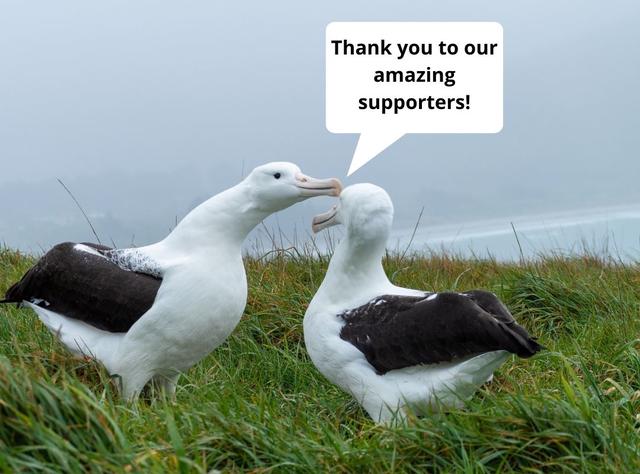 Well last season was a great year with 30 chicks fledging which is a new record! This season "2021/22" is well underway with 36 eggs laid and 29 of these are fertile. 122 individual birds have been recorded/ sighted by the rangers and we expect this number to further increase as new/ first time arrivals sneak in from December - February.

In other news! pervious Royal Cam pairs - GO, WO who had Amīria in 2018 and OGK, YRK who had Atawhai in 2020, are back this season and are within view from the Richdale Observatory. We also have 4 nesting on view from our smaller viewing area "observation post" providing close up views of these beautiful birds.

Over the next 1-2 weeks the Department of Conservation and Cornell Bird Lab will shift the Royal Cam to a new location where we will have another royal cam year.

We would like to say a huge thank you to all our supporters and donors who have given donations over the years and during these uncertain and trying times with the effects of COVID-19. All are highly appreciated, this goes into the hard work and dedication to help support the charitable conservation work we do, to assist with toroa conservation and looking after Pukekura "Taiaora Head".

We do hope one day you will all be able to visit the Royal Albatross Centre and witness the magic the royal albatross create.

If you are unable to visit us, you can join one of our new Virtual Albatross Experiences by visiting our website.

Rosemary 3 days ago
Thank you Sharyn and all the Rangers for your care of this beautiful Albatross colony.
$60

Kia ora Private Donor, Thank you for your generous donation! This will assist with our charitable objectives to help support the ongoing conservation work with the toroa/albatross at Pukekura "Taiaroa Head". We are looking forward to the hatching period which isn't too far away - 29 fertile eggs currently. We do hope you get the chance to visit us one day soon. Nga mihi, Ashleigh McCormack - Assistant Manager, Royal Albatross Centre/ Otago Peninsula Trust

Rosalind on 10 Jan 2022
Thanks to the Northern Royal Albatross Facebook Group and the wonderful staff at the Royal Albatross Centre, I am able to enjoy learning about your work. Best wishes to the Royal Cam Family and all of the other Albatrosses and marine birds that benefit from Otago Peninsula Trust and keeping Pukekura/Otago Head a safe and healthy site for seabirds. Thank you especially to Chris McCormack and the Rangers (Sharyn Broni, Theo, Colin, etc.); and to our Facebook group Admin, Sharon Dunne. Aloha from Hawaii ~ Roz Young
$100
Otago Peninsula Trust

Kia ora Rosalind and Aloha, Thank you for your lovely and generous donation as always. Your support and dedication is absolutely appreciated and funds generated go towards our charitable objectives to assist and support this unique and amazing location to help with the efforts the DoC Rangers provide to assist with toroa conservation and protection. I will most certainly pass on your thanks to them also. We are really looking forward to the hatching period which we know isn't far away. Nga mihi, Chris McCormack Operations Manager / Royal Albatross Centre/ Otago Peninsula Trust

Jill on 10 Jan 2022
In memory of my lovely aunt, Elizabeth Nation, who I introduced to the Royal Cam in 2020 - and she loved it! She would love to know that she has helped these beautiful birds. Arohanui, Jill White and family.
$50
Otago Peninsula Trust

Kia ora Jill, Thank you for your lovely and generous donation. Your's and Elizabeth's support and interest to the Royal Cam is absolutely appreciated and funds generated go towards our charitable objectives to assist and support this unique and amazing location to help with the efforts the DoC Rangers provide to assist with toroa conservation and protection. We are really looking forward to the hatching period which we know isn't far away. Nga mihi, Chris McCormack Operations Manager / Royal Albatross Centre/ Otago Peninsula Trust

Created by, and paying to a verified bank account of, Otago Peninsula Trust (Charity)
Registered Charity
A Registered Charity has legal recognition under the Charities Act 2005.
Tax credit
Donations of over $5 are eligible for a New Zealand charitable giving tax credit.
Page Moderated
The page has been checked by our team to make sure it complies with our terms and conditions. 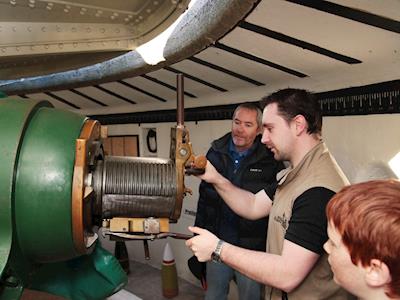 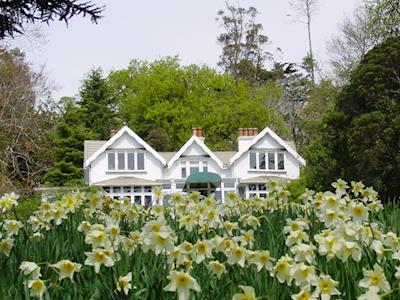 closed
Bring back the birdsong at Glenfalloch Garden
$175 raised 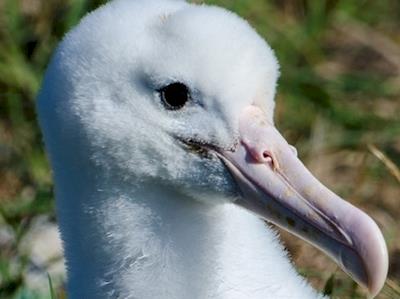 Want to get in touch with Otago Peninsula Trust?