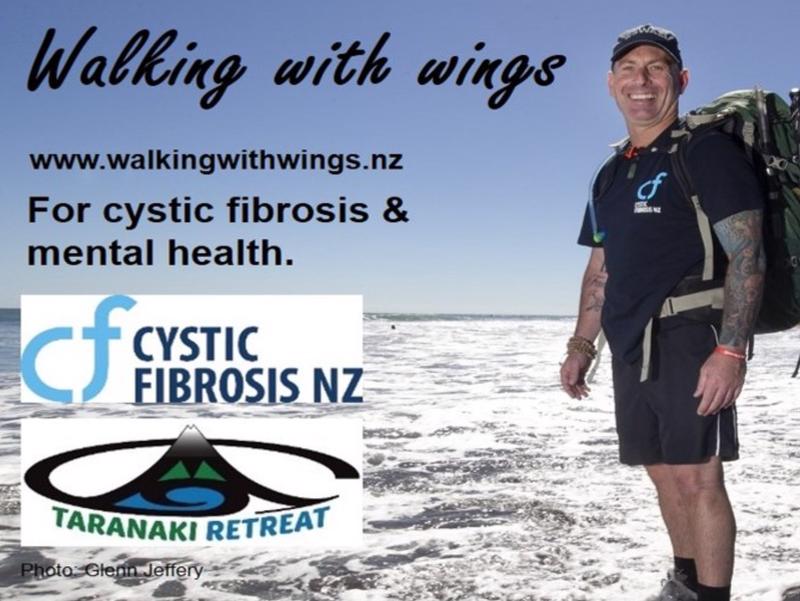 Fundraiser page created in the Challenges category by Shane Kidby

Shane Kidby is walking Aotearoa’s 15,000 km coastline for cystic fibrosis and mental health. It may take him 2 years to complete.

Shane Kidby (48 years) is attempting to walk Aotearoa’s entire coastline to raise funds and awareness for cystic fibrosis and mental health in honour of his late brother and mother.

Cystic fibrosis and mental health are close to New Plymouth resident, Shane Kidby’s heart. When he was only nine years old, Shane lost his little brother, Daniel, to cystic fibrosis. His mother passed away with cancer just recently and Shane, himself, had a hip replacement a few years ago as a result of Perthes disease as a child. Shane is all too familiar with mental health battles experienced as a consequence of ‘life’. This epic adventure, Walking With Wings, is part of his grander plan to live his life with purpose and help others find theirs.

Shane says this hikoi has been a long held dream, ever since he was a kid when he and Daniel would pretend to be explorers.

"It’s been my lifelong goal, but there will be a lot of challenges," Shane explains.

"New Zealand’s coastline has some wild and formidable terrain; and our winters are tough.

"I know it will be gruelling, both physically and mentally. I have been training for a few months now with the help of experts. I will give it my best shot, but it’s a big challenge that only one other person has completed before.

“It was my Mum's dream to see me start walking but sadly she passed away just a few days before my start date. I am now starting on the 15 July 2021 at Cape Reinga in the North Island of NZ. I'll be heading down the west coast towards Wellington. I'll tackle the coastline in stages - step by step, stage by stage. Each stage alone is a huge achievement. I estimate the entire coastline will take me a couple of years to complete.

"It’s my mum’s wish to see me start this journey and I know that both my Mum and Daniel will be with me in spirit”.

Shane will be using his trek to raise both awareness and donations for his nominated charities - Taranaki Retreat and Cystic Fibrosis NZ.

He invites New Zealanders to follow, donate and join him on this journey.

• Who: Shane Kidby, from New Plymouth.

• What: Attempting to traverse the 15,000 km coastline of Aotearoa (only one other person, Brando (Wild Boy) Yelavich, has ever done this before).

• Why: Raise funds and awareness for cystic fibrosis and mental health

• How: Will be done in stages and reviewed at the end of each stage.

• Funds for the adventure: Funding most himself, but help appreciated at https://givealittle.co.nz/cause/walking-with-wings-for-cystic-fibrosis-and-mental

Follow Shane's journey on a map in real time at this link https://www.followmychallenge.com/live/walkingwithwingsnz/

Hello and THANK YOU! Without you this isn't possible. Here's a few updates:

1. Shane has started walking as of today. He left Cape Reinga in the North Island of NZ a few hours ago. You can see his progress on a map in live time at this link https://www.followmychallenge.com/live/walkingwithwingsnz/

3. We have Walking With Wings hoodies for sale online. You can pre order here https://www.gamechanger.org.nz/walkingwithwings

About 27% of proceeds of the sale of each hoodie goes to CF NZ and Taranaki Retreat.

THANK YOU ALL SO MUCH! Your support is overwhelming and completely amazing!

Lauren and Don 6 days ago
Congratulations on completing the first 160 ish Km’s Shane. We are behind you cheering you on from Australia. Really enjoy watching your progress.
$50

Thank you so much! Really appreciated.

Shelley on 27 Jul 2021
Hi Shane. I will donate small amounts at milestones along your journey: First leg completed under extremely challenging conditions. Well done! Also hope this donation qualifies me for a couple of draws for the Swazi Hoodies raffle which closes at the end of July. Look forward to following your next leg once your body is recovered. PS Your strapping looks fabulous!
$10
Shane Kidby

Shelly thank you. Much appreciated 😊

Wow!!! Thank you so much! This is greatly appreciated.

Enele on 20 Jul 2021
Sorry didn’t have much money left lol otherwise I would’ve sent more! But all the best for the rest of the walk!
$10
Shane Kidby

Every cent counts Enele. Thank you so much for your contribution. It helps a lot.

Created by Shane Kidby
Donations to this page will be split evenly between 2 payees:

Paying to Cystic Fibrosis NZ
Tax credit Donations of over $10 are eligible for a New Zealand charitable giving tax credit.
Page Moderated The page has been checked by our team to make sure it complies with our terms and conditions.